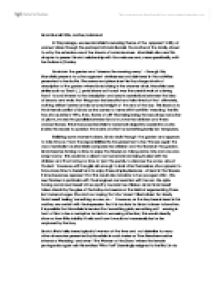 Linda Burnell: Wife, mother, individual. In this passage, we see Mansfields recurring theme of the apparent futility of womens lives through the portrayal of Linda Burnell,

Linda Burnell: Wife, mother, individual. In this passage, we see Mansfield's recurring theme of the apparent futility of women's lives through the portrayal of Linda Burnell, the mother of the family, shown to us by the extensive use of her stream of consciousness. Mansfield also uses this chapter to present Linda's relationship with the male sex and, more specifically, with her husband, Stanley. Linda is in the garden and 'dreams the morning away' - through this, Mansfield presents to us her apparent aimlessness and disinterest in the activities presented to her by life. The scene and place is set first by a large chunk of description of the garden where Linda is lying in her steamer chair. Mansfield uses similes such as 'Each [...] petal shone as if each was the careful work of a loving hand' to add interest to the description and create correlations between the idea of beauty and work; that things can be beautiful and take time but that ultimately, nothing will last forever or hold any real weight at the end of the day. ...read more.

It is possible that Mansfield intended the 'something pink, something soft' waving in front of him to be a metaphor for Linda's wavering affection; this would directly show us how little stability it held and how it would not necessarily last or be captured by the boy. Linda's life is fairly stereotypical of women at the time and not dissimilar to many other characters presented by Mansfield in such stories as 'Frau Brechenmacher Attends a Wedding' and even 'The Woman at the Store' where the female protagonists again ask this endless 'What for?' Seemingly resigned to her life, Linda loses interest in her family and seeks time alone away from her children. Child-bearing has left her an empty shell; Mansfield uses the following simile to explain it: 'it was as though a cold breath had chilled her through and through on each of those awful journeys'. Linda has been used as a breeding tool and rejects the idea that it was 'the common lot of women to bear children'. She has become a cold character due to her children and finds herself incapable of loving them. ...read more.

Throughout the passage, Linda is painted as being 'seized and shaken' and generally flustered. Childbearing having left her cold, she defies nature by ostensibly having no motherly feelings whatsoever. Life has ripped her of her spirit and she demands whether 'it [would] always be so' and 'was there no escape?' Despite this cold persona, Mansfield shows us that Linda was once a fun-loving character, at least as a child. She and her father were keen to 'cut off somewhere, to escape. Two boys together.' This shows us that, from the very beginning, Linda had no desire to play with dolls or keep a play-house and, had she not been constrained by the confines of society at the time, would have had adventures far higher on her list of priorities than marital and maternal drudge. Essentially, this passage helps to explain the social politics of the time and the role of women, something which disgusted and fascinated Mansfield. As one of the central characters, Linda helps shape the story and those around her. It also touches upon the sense of duty which this character has and her internal struggle with her indifference towards it. ...read more.