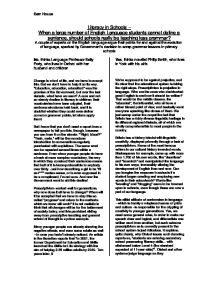 Literacy in Schools - When a large number of English Language students cannot define a sentence, should schools really be teaching less grammar? A couple of experts on the English language argue their points for and against the evolution of language, sparked by Government's decision to scrap grammar lessons in primary schools No, thinks Language Professor Sally Forty, who lives in Oxford with her husband and children Change is a fact of life, and we have to accept this. But we don't have to help it on its way. "Education, education, education!" was the promise of the Government, but over the last decade, what have we seen? A sure and not-so-steady decline in literacy in children; their vocabularies have been crippled, their sentence structures held back, and it is doubtful whether they could even define common grammar points, let alone apply them! But I know that you don't need a report from a newspaper to tell you this, though, because you can hear it on the streets. "'Right, blood?" "Yeah, mate." will be the monotone introduction to conversations regularly punctuated with expletives. The same word can be repeated several times within a sentence. ...read more.

Britain has a history brimful with linguistic creativity, displayed primarily through a lack of prescriptivism. Some of the most famous writers in our cultural history invented words. Shakespeare for example, came up with more than 1,700 of his own words, like "dauntless" and "besmirch" and manipulated the language in his own ways, irreversibly altering the development of English then and now. Can you imagine the response in schools if a student began creating and employing new words in their schoolwork? Words like "tweeting" and "blogging" seem to be frowned upon in schools, even though these are now a part of our language. This elitist attitude of conformism in language - which is frankly a misplaced sense of pride and culture -is responsible for the crippling of creativity in younger generations. Yes, we need some general rules, in order to make our speech clear and logical, and differentiate one written word from another, but such extreme prescriptivism as is currently present in the school system is just ridiculous. It explains, quite clearly, why Ofsted issues such damning reports as, "students are entering secondary school possessing 'literacy skills... with attainment below Level 4 (the standard expected of 11-year-olds)'". ...read more.

The lyrics of music are as strong an influence on modern language as any of the great epics of the past were, mainly because it is the music being produced today which affects the language being employed by the youths of today. These are the ones who will shape and craft our language in the future, and this new music will play a large role in it, with its non-standard grammar. It's not true now that the shocking combination of "he" with "don't" is confined solely to rap and R'n'B, but it can now be found in the general mainstream of music, and even the more artistic and creative musical genres, such as rock and the youth "indie" movement. It is not true now that non-standard English is only for the uneducated working class, or that people cannot understand it. It is not true now that we must teach purely prescriptive English. So, my message to all the young people reading this - because believe it or not, they can read! - is this: break the rules and use language as you want. Language changes, and you're the ones changing it. As for my message to the teachers: let them break the rules. ?? ?? ?? ?? Sam House ...read more.