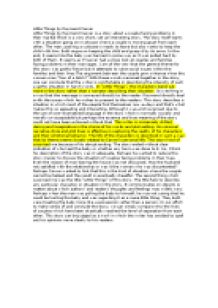 ﻿Little Things by Raymond Carver Little Things by Raymond Carver is a story about a couple facing problems in their marital life.It is a very short, yet an interesting story. The story itself starts with a situation going on in ahouse where a couple is moving apart from each other. The man, packing a suitcase is ready to leave but also wants to keep the child with him. Both argue on keeping the child and grasp it by its arms. In the end, it seems like the baby was harmed in some way as it was pulled hard by both of them. ...read more.

This story describes a situation in which most of the people find themselves now-a-days and that's what makes this so appealing and interesting. Although I was a bit surprised due to the use of over-dramatized language in the story which is normally socially and morally un-acceptable but perhaps the essence and true meaning of the story could not have been achieved without that. The writer is immensely skilled, daring and imaginative in the choice of his words and plot setting. His minimal narrative style and plot lines is effective in capturing the reality of his characters and their emotional behavior. The life of the characters is described in such a way that its theme seems closely related to Carver?s personal life. ...read more.

The title fails to describe any particular character or situation in the story. It communicates on objects or matter about which authors? and readers? thoughts and feelings may widely vary. Perhaps when the man was pulling the baby to himself, he was not caring that he could be hurting the baby and was regarding it as a mere little thing. They both were treating the baby more like a possession rather than a person. In our effort to make sense of and conclude the story, we can simply compare it to the lives of couples which have been drastically reached the level of separation from each other. This story can be judged as a work in which the writer has avoided to spell out his opinions more clearly to his readers. ...read more.