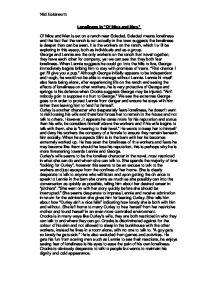 Loneliness in "Of Mice and Men." Of Mice and Men is set on a ranch near Soledad, Soledad means loneliness and the fact that the ranch is not actually in the town suggests the loneliness is deeper than can be seen. It is the workers on the ranch, which I will be exploring in this essay, both as individuals and as a group. George and Lennie are the only workers on the ranch that travel together; they have each other for company, yet we can see that they both fear loneliness. When Lennie suggests he could go into the hills to live, George immediately begins bribing him to stay with promises of treats. "First chance I get I'll give you a pup." Although George initially appears to be independent and tough, he would not be able to manage without Lennie. Lennie himself also fears being alone, after experiencing life on the ranch and seeing the effects of loneliness on other workers, he is very protective of George and springs to his defence when Crooks suggests George may be injured. ...read more.

He has seen the loneliness of the workers and fears he may become like them should he lose his reputation, this is perhaps why he is more threatening towards Lennie and George. Curley's wife seems to be the loneliest character in the novel, most restricted in what she can do and whom she can talk to. She spends the majority of time "looking for Curley", however this seems to be an excuse to talk to the workers and just escape from the confines of her home. She is clearly desperate to talk to anyone who will listen and upon getting the chance to speak to Lennie in the barn she crams as much as she possibly can into the conversation as quickly as possible, telling him about her desired career in "pitchers". "She went on with her story quickly before she should be interrupted." She seems desperate to impress Lennie and receive admiration in return for the admiration she gives him for beating Curley. ...read more.

Candy is also desperate not to spend his last years alone and is willing to give up everything he owns to Lennie and George just for a chance at companionship and freedom especially after the loss of his dog. "I'd make a will an' leave my share to you guys in case I kick off." He has only known Lennie and George for a short period and yet the weight of loneliness is enough to drive him to desperate measures to lift the burden of being alone. In conclusion it is loneliness which is the backbone of this novel, it drives many of the events including the death of Curley's wife and of Lennie. It appears that the men are given respect on how well they conceal their loneliness. Slim who is the most respected, doesn't show any signs of weakness, whereas Curley is so desperate not to be lonely he resorts to violence and receives little respect. This novel was also written during the depression, meaning the economy was unstable and having families was difficult, increasing uncertainty and making loneliness seem more inescapable. Niki Holdsworth ...read more.