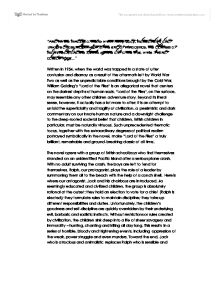 Lord of the Flies, on the surface, may resemble any other children adventure story. Beyond its literal sense, however, it actually has a lot more to offer: it is an attempt to unfold the superficiality and fragility of civilization, a pessimistic an

"And in the middle of them, with filthy body, matted hair, and unwiped nose, Ralph wept for the end of innocence, the darkness of man's heart, and the fall through the air of the true, wise friend called Piggy..." Written in 1954, when the world was trapped in a state of utter confusion and disarray as a result of the aftermath left by World War Two as well as the unpredictable conditions brought by the Cold War, William Golding's "Lord of the Flies" is an allegorical novel that centers on the darkest depths of human souls. "Lord of the Flies", on the surface, may resemble any other children adventure story. Beyond its literal sense, however, it actually has a lot more to offer: it is an attempt to unfold the superficiality and fragility of civilization, a pessimistic and dark commentary on our innate human nature and a downright challenge to the deep-rooted societal belief that children, British children in particular, must be naturally virtuous. Such unprecedented thematic focus, together with the extraordinary degrees of political realism portrayed symbolically in the novel, make "Lord of the Flies" a truly brilliant, remarkable and ground-breaking classic of all time. The novel opens with a group of British schoolboys who find themselves stranded on an unidentified Pacific island after a serious plane crash. With no adult surviving the crash, the boys are left to fend for themselves. ...read more.

When viewed afar, the group of children appear as black dots that resemble the flies, and their frenzied attraction to Jack is just like the flies' natural inclination toward the unpleasant pig's head. As such, with the use of such compelling symbolism, Golding's notion on humanity is reinforced - Evilness does not arise from external sources. It is always there in us, looking for a chance to be unleashed and released. I am also tremendously impressed by Golding's ingenious use of contrast between the exposition and resolution in the novel. Distinct contrast can be seen in terms of setting, physical appearance of the children and even the dictions that Golding utilizes to address the boys. These effective contrasts highlights the fragility of the veneer of civilization, showing how readily humans can return to our primitive nature. In the opening of the novel, the island that the children are marooned on is one that is beauteous, if not paradise-like. There is a lagoon where water shimmers, a beach with warm sand as well as a palm terrace filled with all sorts of tropical fruits. Butterflies also flutter across the island elegantly, heightening the sense of tranquility and harmony on it. The children, on the other hand, are in absolute order. Dressed in neat uniforms, Jack and his choirboys are "marching approximately in step in two parallel lines" and are "wearing a square black cap with a silver badge on it". ...read more.

Yet, what restrains it from becoming my "all time favorite" novel is that Golding's perception on human nature is too dark for me to agree with. While I understand that the novel was produced in the midst of a chaotic century, with wars and conflicts wrecking havoc on our earth, that did not mean one could easily make the conclusion that every person must be predominantly evil. For instance, even in a state of war, there are great personalities such as Oskar Schindler and Raoul Wallenberg who dare to risk their lives and reputation to save the innocents. In fact, The Yad Vashem Museum in Jerusalem is founded primarily to honor at least over 11,000 "Righteous Gentles" who secretly assisted or rescued the guiltless Jews. Golding certainly has no justification to deny the greatness that these people display. I do reckon that certain instincts within us are directing us to immorality but it is definitely not a fact that everyone would resort to unethical ways when there is no restriction to bound us. At the end of the day, whatever comes our way, we always have a choice, and there are people who choose to do what is right. "Fancy thinking the beast was something you could hunt and kill?" - this is a question posed by the Lord of the Flies in the middle part of the novel. Even after reading the novel for repeated times, I still believe "Yes, the process may be hard as it takes a great deal of courage, determination and faith but the beast can surely be killed, as long as we want to." ...read more.

This is an excellently response. A competent collection of analytical ideas and an extremely thought-provoking response to the novel 'Lord of the Flies' by William Golding. The candidate makes an outstanding use of personal viewpoints backed up with objective critical ...

This is an excellently response. A competent collection of analytical ideas and an extremely thought-provoking response to the novel 'Lord of the Flies' by William Golding. The candidate makes an outstanding use of personal viewpoints backed up with objective critical analysis, which naturally encourages perfection in their literary critique. The answer is written with strong, confident adjectives and an indelible recognition of the gravity of the novel and it's symbols, themes, characters, motifs, and plot. Throughout the answer the candidate makes excellent reference to the text, showing they can structure an essay coherently and objectively, and they endeavour to provide an excellent counter-argument to balance out their admiration of Golding's work here (more on these three end paragraphs later on).

The Level of Analysis here is truly incredible. The candidate has made an absolutely flawless analysis of the novel, including a sensitive awareness of the theme Golding presents and a sound, balanced appreciation of the complexity of the context behind the novel. There are really only two points for me to raise here, both relating to character, as I feel there could be a better analysis of character outside Ralph and Jack. The analysis, whilst extensive and indicative of a very strong A grade/full marks candidates, does not sufficiently cover the character of Simon and his relevance. There was a missed opportunity when the candidate was discussing the title of the novel, where they could've linked Golding's depiction of mankind's innate savagery being represented in the sow's head (what analysis there is though, is brilliantly insightful and thoroughly interesting to read).

The candidate could've brought the title's literal derivation from the Hebrew "Beelzebub" (meaning "Lord of the Demon flies"; the historical linguistic root for Golding's title), which gives the novel it's religious resonance and fortifies the belief that Simon is the God-like character - the only character who remains untouched by the evil of the island; the only character who does not harbour the same deep animalistic traits that are waiting to be awakened by the loss of civilisation (which are evident in the others boys' gradual degradation of civility). The candidate could then draw comparisons between the presence of the Devil (Beelzebub/The Lord of the Flies) confronting and taunting the God-like character of Simon ("Simon's head was tilted slightly up. His eyes could not break away and the Lord of the Flies hung in space before him. 'What are you doing out here all alone? Aren't you afraid of me?'") when they refer to this scene in their essay, suggesting how Golding creates a symbolic congruence with the story of Jesus being tempted by the Devil in the desert, going for forty days and forty nights without food or water, to which Simon/Jesus triumph, but both Simon and Jesus were killed shortly after the tribulation.

And this leads me on to the last point, which arguably is a bigger concern. The last three paragraphs are an unorthodox juxtaposition of the rest of the essay by explaining what the candidate finds not quite so successful on Golding's novel, citing that the "novel is that Golding's perception on human nature is too dark for me to agree with". Due to a lack of attention given to Simon in this essay, this suggests the possibility that maybe the candidate did not make the link between Simon being innocent of the primitive desires for blood-thirst that corrupted all the other boys, even Ralph, who joins in in killing Simon (another symbolic congruence to Jesus, who was condemned and killed by those who loved him, and died to save them from themselves, as soon after Simon's murder, Ralph realises the horrific decline of morality). This is by no means detrimental to the entirety of the essay, but it does leave a question mark over the last three paragraphs, which may have been better not being written at all.

The Quality of Written Communication is flawless. The candidate makes no errors in their spelling, punctuation or grammar and the essay is an excellent example of how proof-reading and spell-checkers are imperative the the clarity of written expression. Without high QWC, candidates cannot expect to achieve top marks, but this essay is a great example of the things that can be achieved by performing simple last-minute checks.