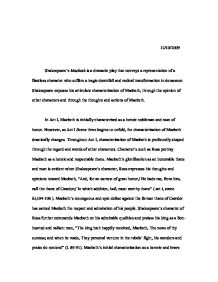 Macbeth's initial characterization as a heroric and brave warrior is validated on his triumphant win in battle, which causes the noblemen and people of Scotland to revere and honor Macbeth. The thoughts and reflections of Macbeth play a fundamental part in his characterization. Shakespeare intentionally opens up Macbeth's mind to the audience, to explore his personal thoughts and reflections. The events that occur in act i scene three, expose Macbeth's pathological desperate need for eternal glory and show his thirst for power. "Present fears/ Are less than horrible imaginings;/My thought, whose murder yet it but fantastical,/Shakes so my single state of man that function/ Is smothered in surmise; and nothing is/ But what is not"(act i, scene iii, 137-142). ...read more.

"To be the same in thine own act and valor/ As thou art in desire? Wouldst thou have that/ Which thou esteem'st the ornament of life,/ And live a coward in thine own esteem,/ Letting I dare not wait upon I would,"(act i, scene vii, 40-44). Lady Macbeth plays a crucial role in the development and transformation of Macbeth. Lady Macbeth's constant criticisms and torment causes Macbeth to revaluate his approach to become king. Shakespeare's eloquent style of writing and brilliancy in the development of essential characters and the thoughts and actions of Macbeth, to articulate the characterization of Macbeth. Macbeth's tragic downfall and transformation as a character is paramount in his characterization because it emits a feeling of repugnance and causes the audience to have a visceral reaction. ?? ?? ?? ?? ...read more.