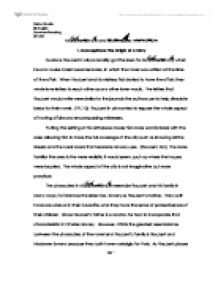 Madame Bovary and Techniques in Fiction

Madame Bovary and Techniques in Fiction 1. Conceptions: The Origin of a Story Gustave Flaubert in all probability got the idea for Madame Bovary when he and Louise Colet became lovers, in which the novel was written at the time of the affair. When Flaubert and his mistress first started to have the affair, they wrote love letters to each other as any other lover would. The letters that Flaubert would write were similar to the journals the authors use to help stimulate ideas for their novel. (TIF, 10) Flaubert in all wanted to expose the whole aspect of having affairs and encompassing mistresses. Putting the setting at his birthplace made him more comfortable with the area allowing him to have the full coverage of the city such as knowing all the streets and the back roads that Madame Bovary uses. (Flaubert, 261) The more familiar the area is the more realistic it would seem, such as where the houses were located. The whole aspect of the city is not imaginative but more practical. The characters in Madame Bovary resemble Flaubert and his family in many ways, for instance the elder Mrs. Bovary as Flaubert's mother. They both have are widows in their future life, and they have the sense of protectiveness of their children. Since Flaubert's father is a doctor, he had to incorporate that characteristic in Charles Bovary. However, I think the greatest resemblance between the characters of the novel and Flaubert's family is Flaubert and Madame Bovary because they both have nostalgia for Paris. As Flaubert places himself in a woman's place you can see his true self coming out. As they both want the pleasurable sensual feeling of love and to some extent, becomes a drug, where they are addicted and cannot find the end. Madame Bovary and Flaubert both have two lovers. Madame Bovary's downfall was the amount she spent on her lovers which leads her into debt and Flaubert engaged in his studies and focused on his writing. ...read more.

Emma would talked is hate to Charles and Berthe but with respect and compassion to the apothecary, the pharmacist and especially the men she is fond of, Rodolphe and Leon. They each have a different personality so it would just make sense if they talked differently. The attitude that each character has towards themselves is honorable. Emma has that sense of respect but also an impression of arrogance, the way she would end up in debt even after the bills had been loaned to her. They do not quarrel but they get along by going to their neighbors houses at night after dinner, or in Emma's case, to her lover's house. They way she has to go to his house secretly by following "the walls that ran along the water's edge". (MB, 141) The character past comes in the beginning of the novel to show us what their personality is going to be like when they are introduced. 5. Point of View The point of view tells us from which perspective is the story being told. There may be ten different characters that means there would be ten different perceptions. The author has to decide in which perspective they would like the story to told from because each of the characters has a different outlook and opinion on the predicament. There might be a character that is almost invisible that can see everything, feel the characters emotions and clarify those sensations into the story, like the narrator in Madame Bovary. 6. Background; Setting; Place; Milieu As the story is placed in France during time that Gustave Flaubert is in, makes the story seem more reasonable since that Flaubert actually knows what is happening during the time. It is as if he has had some personal experiences. At first Charles is in a school because the country did not have the education that his parents wanted. ...read more.

He wanted to make an impacted on culture and not just another reading book. One of the reasons why this novel is faithless is because he grew up at the height of the romance movement and that is how the people of civilization behaved. Gustave believed that the personality and style of the author must vanish into the book and the book must not lose its originality. He deemed that style was impersonal and it is unique in the sense that expressing things are intensified in color. Who would think that to take the dreariest setting, the prettiest characters, and the most common to would make a masterpiece? All of theses symbols: the knife, the silly cap, cigar case, all encompassed who Charles really was, a lowly doctor with no individuality. The way Flaubert included the "small, ignoble Venice" of the river in Rouen and the pimples on his first wife's face was like " the budding of spring" made the scene more interesting making his style more impressive and ideal. The way Emma sees Charles as the dorky village doctor, and how the children say as unromantic, clearly shows the lack of respect the she has for him, his entire life is devoted to her. To show that even cared he forgave her lover saying that it was destiny that choose its path. The way Flaubert embraced Charles and his affection to his daughter Berthe has included a bit of himself and his care for his motherless niece. Madame Bovary is a historicist fallacy because the readers judge the book because of the time it was written in and what the time and setting is. Flaubert did not want dell with the lawsuits and the modernization of France. All he wanted to do was put out in words what societies doing. His need for perfection really made him strive for the perfect sound. He would work for hours on days until he could find that one word that drove him crazy. ?? ?? ?? ?? Disha Shukla IB English Summer Reading 8/1/05 pg 1 ...read more.