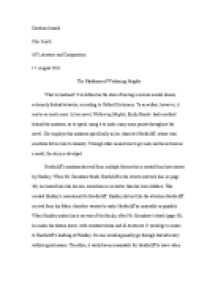 ï»¿Carolina Anzola Mrs. Smith AP Literature and Composition 17 August 2012 The Maddness of Wuthering Heights What is madness? It is defined as the state of having a serious mental illness, extremely foolish behavior, according to Oxford Dictionary. To an author, however, it can be so much more. In her novel, Wuthering Heights, Emily Brontë had a method behind the madness, so to speak, using it to make many main points throughout the novel. She employs this madness specifically in her character Heathcliff, whose own emotions driven him to insanity. Through what causes him to go mad, and his actions as a result, the story is develped Heathcliff’s madness derived from multiple factors but is rooted from hate shown by Hindley. ...read more.

He lost care for anything other than shaming Hindley and gaining control of the Heights. He didn?t care who got in his way, and used others for his own selfish reason. This was the reason why Heathcliff married Isabella (page 131). Isabella would not have known of his schemes, as Heathcliff kept his true character hidden; he kept his madness well hidden. After Catherine?s death, he would have no other purpose to live but to fulfill his plan, even using Cathy (Catherine?s daughter) and his own son, forcing them to marry (page 248). Therefore, there is no question that the theme that the desire for revenge can consume someone is not a question. Heathcliff?s thirst for revenge was caused by his madness, and it is present in most of the book. ...read more.

His madness only worsened when she died, as the thought of life without her was too much for him to bear. He caused her death by running off with Isabella. His madness led to Catherine?s lapse from reality. She lost her mind over his actions, and as a result he lost her. His madness was caused by love, as he didn?t know how to grieve. The message of spiritual love and torment that is present throughout the story is shown throught this aspect of Heathcliff?s madness. He loved Catherine desperately, and her death tormented him for the remainder of his life. His madness nearly ruined the lives of the others around him, stopped only by his own death. Was Heathcliff mad before he arrived at Wuthering Heights? It is not said, but how it developed is crucial in developing the story. ...read more.