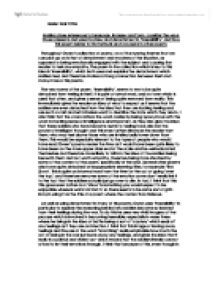 Making close references to language, imagery and form, consider the ways Owen presents and uses mockery and detachment in 'Insensibility' and how this poem relates to his methods and concerns in other poems

Making close references to language, imagery and form, consider the ways Owen presents and uses mockery and detachment in 'Insensibility' and how this poem relates to his methods and concerns in other poems Throughout Owen's collection of poetry, on of the running themes that we can pick up on is that of detachment and mockery of the situation, as opposed to being emotionally engaged with the subject and causing the reader to feel any empathy. The poem in the collection which is key to this idea is 'Insensibility', which both uses and explains the detachment which soldiers feel, and therefore makes a strong connection between itself and many more of his poems. The very name of the poem, 'Insensibility', seems to me to be quite detached from feeling in itself. It is quite a formal word, and not one which is used that often, and gives a sense of being quite removed from reality. This immediately gives the reader an idea of what to expect as it seems that the soldiers are even detached from the idea that they are lacking feeling and use such a cold and emotionless word to describe the state which they are in. I also think that the connotations the word carries by being synonymous with the word for lacking sense or intelligence are important, as they also give the idea that these soldiers who have become numb to feeling have also lost the power of intelligent thought and this even further distances the reader from them, who may feel above those who are intellectually lower down than them. This would be especially relevant to the types of people who would have read Owen's poetry nearer the time as it would have been quite likely ...read more.

He also uses some quite harsh phrases such as claiming that those who have shut off their feelings "Can laugh amongst the dying, unconcerned". This at first sounds very shocking to the reader as it makes the soldiers sound incredibly cold and heartless that they are able to cut off their feelings towards those who are dying. I think that this phrase is made to be particularly cold sounding by keeping the word 'dying' in the present tense and using the word 'amongst' almost make it sound as if the soldier is laughing at the deaths of the friends around them. Although this is clearly not the case it is a very powerful shock tactic and very much contrasts with the small amount of empathy we are given in the few lines before. I think that Owen has a variety of different reasons for using the idea of detachment in this way, one of which is of course to shock and confuse the reader as to what he really means, as this means that they are more likely to think about it and consider and rethink their own views, as well as making the poem have a little more impact. I also think however, that this detachment also makes some of the poem seem quite ironic and perhaps even mocking, and this brings on a whole new set of questions as it is quite ambiguous as to where Owen is actually being serious about the importance of soldiers being insensible and where he is mocking it, and I think when you look at the poem as a whole he is almost doing both. ...read more.

Phrases such as "iced east winds" and "flowing flakes that flock" use sibilance and very soft consonant sounds so that they really get muddled up in your brain and are almost so confusing to us that the emotion is lost in them. The same goes for the onomatopoeia in this poem, as words like "rumbles" and "stormy" conjure up the idea of stormy background sounds which almost transports you there, and although it could be argued that this would make the emotion you felt become stronger rather than weaker, I think that in fact you become lost in the sounds and feelings of the places where they are in rather than the emotions of the soldiers and again you are a bit overwhelmed with all the imagery and the empathy for those fighting is once again lost amongst everything else. I think that this is a clever trick of Owen's because it takes some time to realise what is actually happening, and once you realise all the death and despair of the poem it also serves the purpose of making the reader feel quite guilty that they did not feel it at first. Overall, the idea of being detached and mocking of the situation is a very prominent theme in almost all of Owen's poetry, whether it is written in that style, or actually discussing what it means to be numb to feelings as it is in 'Insensibility'. Either way, the main reason behind its use tends to be to shock, although also it does have the effect of really making Owen's poetry stand out and makes the reader thing much more about what the actual meaning is, which means that Owen is much more able to get his points across to them. ?? ?? ?? ?? Harriet Blair 12EM ...read more.