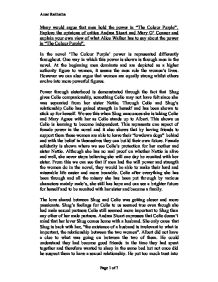 Many would argue that men hold the power in "The Colour Purple". Explore the opinions of critics Andrea Stuart and Mary O' Connor and explain your own view of what Alice Walker has to say about the power in "The Colour Purple". In the novel 'The Colour Purple' power is represented differently throughout. One way in which this power is shown is through men in the novel. At the beginning men dominate and are depicted as a higher authority figure to women, it seems the men rule the women's lives. However we can also argue that women are equally strong whilst others evolve into more powerful figures. Power through sisterhood is demonstrated through the fact that Shug gives Celie companionship, something Celie may not have felt since she was separated from her sister Nettie. Through Celie and Shug's relationship Celie has gained strength in herself and has been shown to stick up for herself. We see this when Shug announces she is taking Celie and Mary Agnes with her as Celie stands up to Albert. This shows us Celie is learning to become independent. This represents one aspect of female power in the novel and it also shows that by having friends to support them these women are able to leave their "lowdown dogs" behind and with the belief in themselves they can build their own future. Female solidarity is shown where we see Celie's protection for her mother and sister Nettie. Although she has no real proof on whether Nettie is alive and well, she never stops believing she will one day be reunited with her sister. From this we can see that if men had the will power and strength the women do in the novel, they would be able to make their hard and miserable life easier and more bearable. Celie after everything she has been through and all the misery she has been put through by various characters mainly male's, she still has hope and can see a brighter future for herself and to be reunited with her sister and become a family. ...read more.

The threat from Alphonso supports Stuart's perception that men are "mostly troublesome, sometimes cruel." Alphonso here has shown a psychological strength because by threatening her, he's forced her into not speaking to other people about any of her problems and teaching her to keep all her problems to herself. However he is not aware that Celie writing to god allows her to offload and share her problems with someone other than herself. O' Connor says that Celie's "existence to be denied" this explains that in her rape experience and also in the fact that she has a lack of voice she is therefore not able to share her bad experience with anyone. However I think she is able to express her feelings through writing so is therefore giving herself a voice and existence which goes against what O' Connor states. Walker shows Alphonso's psychological power over Celie in the beginning of her writing letters. Celie crossed out "I am". This is almost as if she is crossing herself out. She changes it to, "I have always been a good girl". It seems that Celie is taking the blame for what Alphonso has done to her. This is the first time we see an authority figure abuse Celie which reinforces male dominance in her life. The rape not only shows physical power strength and power but also emotional authority, due to Celie's naivety, for his own pleasure. Another time in the novel in which we see Alphonso's power over Celie is when he is trying to get rid of her by marrying her off. However it's more like he is selling her as they barter, he even throws in a cow. This again relates back and shows how black females in this time period were still being treated as slaves. O' Connor tells us her "feminist analysis is interested in the voices", as it's a male dominated conversation where Celie only gets in a few words on a highly important decision which can affect her whole life. ...read more.

It's all she knows and therefore she believes it's normal. Power and the placement of it is also shown in the African part of the novel and it is through these tribes we are able to compare Celie with the traditional African way of life. The Olinka's, one of the main tribes that are introduced to us, hold the power of life and death over their wives. The men are also looked upon as better than women in the tribe. The structure of power in that who holds it and who doesn't in the tribe is also shown in Celie's life through her being raped and that fact she is not able to enjoy sex with her partner Albert, "I know what he doing to me he done to Shug Avery and maybe she like it". The fact that she cannot enjoy it may be cause by Celie's feelings and emotions towards male's as she has been abused by them all her life. This is supported by Stuarts view that "men are never the source of emotional sustenance or long term happiness for women. However this is does not seem true for Shug as she looks happy with her male partners, this may be because she always seems to have control over her relationships. In conclusion I can say that in the beginning of 'The Colour Purple' it is the men who hold all the power, however as new characters' are introduced it is slightly more balanced as Shug and Sofia speak there mind and stand up to any man. Also later Celie and Squeak both stand up for themselves, they take control of the situation but also take away the power from the men and hold it themselves. At the beginning of the novel Celie writes to God, she then starts writing to her sister Nettie, this shows a change in her and in the end all her hopes pay off as she breaks away from her abusing husband and lives with her family; her sister Nettie and her kids with Shug. ?? ?? ?? ?? Amar Raithatha Page 1 of 7 ...read more.