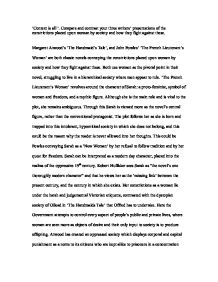 Margaret Atwoods The Handmaids Tale, and John Fowles The French Lieutenants Woman are both classic novels conveying the constrictions placed upon women by society and how they fight against the

'Context is all '. Compare and contrast your three writers' presentations of the constrictions placed upon woman by society and how they fight against these. Margaret Atwood's 'The Handmaid's Tale', and John Fowles' 'The French Lieutenant's Woman' are both classic novels conveying the constrictions placed upon women by society and how they fight against these. Both use women as the pivotal point in their novel, struggling to live in a hierarchical society where men appear to rule. 'The French Lieutenant's Woman' revolves around the character of Sarah: a proto-feminist, symbol of women and freedom, and a mythic figure. Although she is the main role and is vital to the plot, she remains ambiguous. Through this Sarah is viewed more as the novel's central figure, rather than the conventional protagonist. The plot follows her as she is born and trapped into this intolerant, hypocritical society in which she does not belong, and this could be the reason why the reader is never allowed into her thoughts. This could be Fowles conveying Sarah as a 'New Woman' by her refusal to follow tradition and by her quest for freedom. Sarah can be interpreted as a modern day character, placed into the realms of the oppressive 19th century. Robert Huffaker sees Sarah as "the novel's one thoroughly modern character" and that he views her as the 'missing link' between the present century, and the century in which she exists. Her constrictions as a woman lie under the harsh and judgemental Victorian etiquette, contrasted with the dystopian society of Gilead in 'The Handmaids Tale' that Offred has to undertake. Here the Government attempts to control every aspect of people's public and private lives, where women are seen more as objects of desire and their only input to society is to produce offspring. Atwood has created an oppressed society which displays corporal and capital punishment as a norm to its citizens who are kept alike to prisoners in a concentration camp, with the high walls and limited thoughts and speech. ...read more.

Through using language such as "the flint lip" suggests a subhuman image of the voice of this poem, linking to the two novels in the sense that all identity has been diminished by allowing society, or in the poem's case, Doctors', total power over one's body. The theme of control is also brought our in Fowles' 'The French Lieutenant's Woman' with the high constrictions in Victorian society. For example, the character of Ernestina represents the evolving economy and fashion, while still remaining dated when it comes to female sexuality and the New Woman. The narrator claims: "whenever the physical female implications of her body, sexual, menstrual, parturitional, try to force an entry into her consciousness," she simply tells herself, "I must not". The narrator seems sympathetic for how sexually frigid she seems, for after Charles's proposal, he says, "How can you mercilessly imprison all natural sexual instinct for twenty years and then not expect the prisoner to be racked with sobs when the doors are thrown open?" The word "prisoner" suggests that Ernestina's actions are limited by her cultural inheritance. Though control is executed powerfully and in many different ways, rebellion takes place on many levels in Gilead, from the lesbian friend of Offred, Moira, and stereotypical female victim Janine, who later becomes Ofwarren, to, ironically, the Commander. Although he is presented as having a hand in establishing Gilead and being part of the social elite who benefit, he seems to break more of its rules than most characters. For example, he has numerous secret meetings with Offred in which he allows her to read, use hand cream, play Scrabble and even go to an underground nightclub, Jezebels, in which sex takes place for reasons other than procreation. Atwood uses his character to attack the pretence in politics and corruption that is kept hidden. While the Mayday underground group is the most actively effective form of resistance, there are subtler ways in which characters rebel privately. ...read more.

Weapons are openly displayed and are mentioned frequently, showing how often Offred sees them or thinks about them - the Government's intended effect: "Aunt Sara and Aunt Elizabeth patrolled; they had electric cattle prods slung on thongs from their leather belts... Guns were for the guards". These weapons and the idea of the handmaids being "enclosed now by a chain-link fence topped with barbed wire" does not however stop the handmaids from rebelling from within this very institution as Offred describes how they "learned to whisper almost without sound...learned to lip-read". This shows how even the greatest attempts at coercing people to obey will always result in rebellion, even if on such a small scale as whispering. Fowles however has a different approach to weaponry in 'The French Lieutenant's Woman' as Sarah uses her sexual power as a weapon. She exerts power through her ability to lure Charles towards her, so she can manipulate him to get her own way. This could be interpreted as Sarah's form of rebellion, through Deleuzean Desires, ushering her to go against the Victorian etiquette and follow her undomesticated impulses and desires. Overall, 'The French Lieutenant's Woman' and 'The Handmaid's Tale' prove that no matter how regimented or organised laws are to control people in any society, there will always be some, if not many, forms of resistance against it. They both determine the hardships of living life as a woman in oppressed societies, yet allow hope to resist against them. This thought is backed up by Fowles in 'The Aristos' stating that if we strive to be free, the "terms of existence encourage us to change, to evolve." Simone de Beauvioir also stated that: "One is not born, but rather becomes, a woman". This is proof that, despite heavy beliefs in the Bible and other such material, to lead domesticated lives is not in the blood of women, but merely led by their environment and history. 3001 words - excluding quotes ...read more.