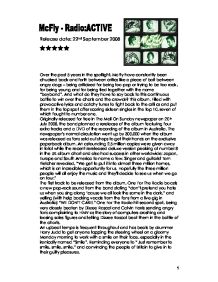 Release date: 22nd September 2008 Over the past 5 years in the spotlight, McFly have constantly been chucked back and forth between critics like a piece of bait between angry dogs - being criticized for being too pop or trying to be too rock, for being young and for being tied together with the name "boyband". And what do they have to say back to this continuous battle to win over the charts and the crowds? This album. Filled with provocative lyrics and catchy tunes to fight back to the critics and put them in the top spot after scoring sixteen singles in the top 10, seven of which fought to number one. ...read more.

The first track to be released from the album, One For The Radio boasts a new pop-rock sound from the band stating "don't pretend you hate us when you sing along 'cause we all look the same in the dark," and yelling (with help backing vocals from the fans from a live gig in Australia) "WE DON'T CARE!" One For The Radio hit second spot, being very closely beaten by Dizzee Rascal and Calvin Harris sending angry fans complaining to HMV as the story of computers crashing and loosing sales figures and letting Dizzee Rascal beat them in the battle of the charts. An upbeat tempo is frequent throughout and has beats by drummer Harry Judd to get anyone tapping the steering wheel on a gloomy Monday morning to work with a smile on their face, especially in the ironically named "Smile". ...read more.

To conclude, if you are reading this review contemplating whether this album is worth your hard-earned cash, the answer is yes. Sure, there could be an amazing instrumental with magical vocals from Tom Fletcher but then it's already been ticked off the list on Wonderland; there could be lyrics with an instant imagery and a soft music-box tinkle similar to Motion In The Ocean or similar to the simple pop debut Room On The Third Floor with influences from previous pop greats such as The Beach Boys or the early times of The Beatles. But who needs a repeat of the previous when explosive guitar riffs and meaningful vocals burst out of this album with the impressive example of The Last Song. If I had any doubts of this band before, all cracks have been filled. Four words - buy this album. ?? ?? ?? ?? 1 ...read more.