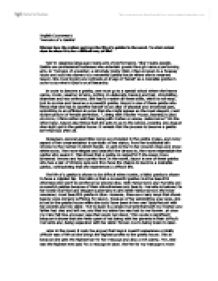 memoirs of a geisha Discuss how the author portrays the life of a geisha in the novel. To what extent does he show it to be a difficult way of life?

English Coursework 'Memoirs of a Geisha' Discuss how the author portrays the life of a geisha in the novel. To what extent does he show it to be a difficult way of life? 'Gei' in Japanese language means arts of performance. 'Sha' means people. Geisha are professional hostesses who entertain guests through various performing arts. In 'Memoirs of a Geisha', a strikingly pretty child, Chiyo is taken to a faraway Kyoto and sold into slavery to a renowned geisha house where she is renamed Sayuri. She must invent and cultivate an image of herself as a desirable geisha in order to survive in Gion's cruel hierarchy. In order to become a geisha, one must go to a special school where she learns dance, music, wearing kimono, putting on elaborate makeup and hair, storytelling, shamisen and tea ceremony. She has to master all these skills, which is not easy, just to survive and become a successful geisha. Sayuri is one of these geisha who thinks that she has to sacrifice herself on an altar of physical and emotional pain, submitting to an affliction in order that she might appear as the most elegant, most elusive picture of female perfection. "..Being with Teacher Mouse, learning to play drums is, I think rather well than being with Mother or worse, Hatsumomo." On the other hand, Sayuri also thinks that she gets to go to the school, avoiding any disgust she might get in the geisha house. ...read more.

Sayuri lives in where Hatsumomo also lives and bringing up even more jealousy in Hatsumomo. She tends to manipulate, plot and manoeuvre to crush Sayuri. 'Hatsumomo's little trick with that kimono is going to cost you more money than you've ever imagined in your life.' This quote reveals that Hatsumomo is trying to sabotage Sayuri's career by lying, accusing her of stealing and making up stories so that she had a bad reputation. It is important in that time in the novel, for a maid like Sayuri to become a geisha, after being taken to the house. This is because when she was a maid, she spent a large amount of money for the fee of her school and daily needs, thus she must pay back what she owes to the geisha house soon after she becomes a geisha. This shows a way of presenting the geisha's life as difficult because the money she obtains go straight towards the geisha house without even falling to her own hand. This is especially hard for Sayuri because Mother adopts her as the 'daughter of the okiya'. This means that all her money will go to the okiya. It could be argued that her title of 'the daughter of the okiya' helps her to get more respect from the others in the house including Hatsumomo, who had been bullying her for a long time. ...read more.

What happened to these people is that they have to work hard just to be alive. For example in the novel, Sayuri has to work with a kimono designer and has given a rough task, which makes the skin of her hands hurts. Some geishas might not survive and died from the war, telling us that the geisha's life will be worse if the district is closed. This shows that their lives also depend on how the government take action, which is sometimes isn't expected. In the time the novel was produced, the other women besides the geisha might have live in an easy way of life. They get to choose what they want for their lives. They can fall in love with any man they want and be married with him as well. For example the wives of the men whom the geisha entertains might as well get a happy life and also children. This is different from the geishas because they don't have such happy lives and are not allowed to fall in love. It is a world in which the desire for wealth and status determines even the smallest of action, motivates even the slightest of details. In conclusion, the geisha truly lives a dichotomous life which surrounded by aesthetic beauty and opulence, but is offered no autonomy of choice. But, as Mameha tells Sayuri earlier on, 'We don't become geisha so our lives will be satisfying. We become geisha because we have no other choice'. ?? ?? ?? ?? ...read more.