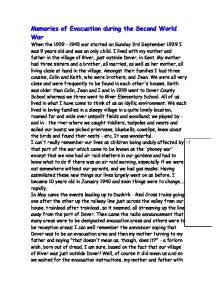 Memories of Evacuation during the Second World War.

Memories of Evacuation during the Second World War When the 1939 - 1945 war started on Sunday 3rd September 1939 I was 9 years old and was an only child. I lived with my mother and father in the village of River, just outside Dover, in Kent. My mother had three sisters and a brother, all married, as well as her mother, all living close at hand in the village. Amongst their families I had three cousins, Colin and Keith, who were brothers, and Jean. We were all very close and were frequently to be found in each other's houses. Keith was older than Colin, Jean and I and in 1939 went to Dover County School whereas we three went to River Elementary School. All of us lived in what I have come to think of as an idyllic environment. We each lived in loving families in a sleepy village in a quite lovely location, roamed far and wide over unspoilt fields and woodland; we played by - and in - the river where we caught tiddlers, tadpoles and newts and sailed our boats; we picked primroses, bluebells, cowslips, knew about the birds and found their nests - etc. It was wonderful. I can't really remember our lives as children being unduly affected by that part of the war which came to be known as the 'phoney war' except that we now had air raid shelters in our gardens and had to know what to do if there was an air raid warning, especially if we were out somewhere without our parents, and we had gas masks. Having assimilated these new things our lives largely went on as before. I became 10 years old in January 1940 and soon things were to change.... rapidly. In May came the events leading up to Dunkirk - Red Cross trains going one after the other up the railway line just across the valley from our house, trainload after trainload, so it seemed, all streaming up the line away from the port of Dover. ...read more.

I am sure that it was here that my affection for the more rugged sort of countryside was born. In the meantime, my parents were also forced to undergo some changes, again the result of evacuation. By September, 1940, Dover had become quite untenable for local industry. My father worked at Buckland Paper Mill, owned by Wiggins Teape, and he and the rest of the workforce were redeployed all over England, Scotland and Wales to other paper mills. Dad was sent to Overton Paper Mill in Hampshire, where they made currency paper. My mother went with him, of course, and she was able to pay me several visits while I was at Aberbargoed. So "home" was now Overton and was to remain so for some years! Initially, my parents lived in one room in a house in Overton; they tried to find a place of their own but had no luck. My cousins Colin and Jean were billetted about half a mile away from me in opposite directions so they were about a mile or so from each other. Colin and I, being boys, had more in common with each other and so I saw more of Colin than I did of Jean who, in any case, went back to River sometime in late 1940 or early 1941. I also had other school friends from River who I used to go about with and made new friends from the local boys and girls. And so my new life went on. My cousin Keith had been evacuated with Dover County School to Ebbw Vale, which is to the north of Aberbargoed, at the head of the Ebbw valley. Some time in the first part of 1941 I learned that I had been accepted for Dover County School and, together with Colin, was to start there in September 1941. Another upheaval! Of course, this meant leaving the Jones's and then being billetted with someone else in Ebbw Vale. ...read more.

There was a radio in the British Restaurant and this was always on for the 1 o'clock news while we were eating our dinners. On D-Day there were two local workmen sitting at a table eating their dinners amongst all of us boys and they were talking to each other very loudly when the news came on. I can remember quite clearly one of our masters telling them in no uncertain terms to 'shut up' so we could listen to the first reports about the landings in Normandy. You could have heard a pin drop! We hung on to every word. As the days and weeks went on it seemed that there was daylight at the end of the tunnel at last. Then came the news that the Canadians had cleared the Germans from the channel ports from where the Germans had been shelling Dover with large calibre naval guns, and we were told that we would be going back home to Dover in December 1944. I was almost 15. This presented another little problem for my parents since my father had not heard anything about his work returning to Dover. So there was a different separation - Mum moved back to River to look after me and Dad had to stay in Overton until Wiggins Teape reopened in Dover later in 1945; he came home at week-ends. It was a strange feeling to return home after all that time. Amongst other things everything seemed to be so much smaller than I remembered it. We were lucky that our house had suffered no more than the windows being broken once or twice by blast from German shells which had burst close-by. Our school had been requisitioned by the Navy, was full of WRNS (Women's Royal Naval Service) and called HMS (His Majesty's Ship) something- or- another. So we started back to school in a motley collection of buildings in several parts of what was a shell- and bomb-scarred town. I think we finally set foot in our school later in 1945. So we were finally back home again in all respects. ...read more.