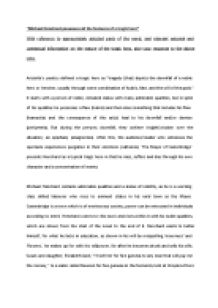 Michael Henchard possesses all the features of a tragic hero. Discuss.

﻿?Michael Henchard possesses all the features of a tragic hero? With reference to appropriately selected parts of the novel, and relevant external and contextual information on the nature of the tragic hero, give your response to the above view. Aristotle?s poetics defined a tragic hero as ?tragedy [that] depicts the downfall of a noble hero or heroine, usually through some combination of hubris, fate, and the will of the gods.? It starts with a person of noble, elevated status with many admirable qualities, but in spite of his qualities he possesses a flaw (hubris) and then does something that includes his flaw (hamactia) and the consequence of this act(s) lead to his downfall and/or demise (peripeteia). But during the persons downfall, they achieve insight/wisdom over the situation; an epiphany (anagnorisis). After this, the audience/reader who witnesses the spectacle experiences purgation in their emotions (catharsis). 'The Mayor of Casterbridge' presents Henchard as a typical tragic hero in that he rises, suffers and dies through his own character and a concentration of events. Michael Henchard contains admirable qualities and a status of nobility, as he is a working class skilled labourer who rises to eminent status in his rural town as the Mayor. Casterbridge is a town which is of meritocracy society; power can be entrusted in individuals according to merit. ...read more.

of taking his arm, nor he offering it", with this hinting that Henchard sees his wife as unnecessary and is holding him back from making something of his life, which is confirmed after he gets drunk and decides to sell her ?I married at 18, like the fool that I was, and this (Susan) is the consequence o?t? and that if he didn?t marry her, he?d be ?worth a thousand pound?. Susan is then sold in the Furmity tent to a sailor named Newson. Henchard makes rash decisions which he then later regrets. This is a recurring flaw in Henchard that is shown throughout the entire novel. We can tell this as the morning after he sells Susan he wishes that he hadn't and takes an oath not to drink again for twenty-one years. Another flaw in his character is his ego and excessive pride. After his party backfired due to the weather, Henchard?s party fails whilst Farfrae?s succeeds. This causes Henchard to become jealous of him and promptly fires him; ?He?s shortly going to leave me?. This is ironic as he also promptly hired him. The next morning however, he once again starts to regret his actions; ?when his jealous temper had passed away his heart sank within him at what he had said and done?. ...read more.

Despite all this, Henchard has had several epiphanies and achieves a new frame of mind on certain topics, from where he realises that he no longer loves Lucetta, as Farfrae married just for money and nothing else, he notices that the two are perfect for each other and he no longer remains as jealous of Farfrae. When he sleeps in the field after leaving Casterbridge, the same way he entered, he realises that everything that has happened has become so because of his actions, and only his actions. The will that Henchard leaves proves that he realises what an appalling live he has lived especially the way he has treated his friends, family and work members as he writes "may no man remember me". This underlines the fact that he just wants to be forgotten and makes sure that everyone leaves him in the past. This is the one thing Henchard can actually see and realise that he has not treated people with respect and he deserved to die alone with "no mourners ......at my funeral". I believe Henchard can be described as a tragic hero as he fits the part and has went through all the stages that are required for a tragic hero. He was of noble status as the Mayor, has vital flaws in his character which eventually lead to his downfall from prominence, eventually having an epiphany with a sympathetic audience reaction. ...read more.