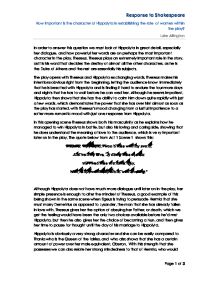 Midsummer nights Dream: How important is the character of Hippolyta in establishing the role of women within the play?

How important is the character of Hippolyta in establishing the role of women within the play?

In order to answer this question we must look at Hippolyta in great detail, especially her dialogue, and how powerful her words are on perhaps the most important character in the play, Theseus. Theseus plays an extremely important role in the story, as it is his word that decides the destiny of almost all the other characters, as he is the Duke of Athens and the rest are essentially his subjects.

The play opens with Theseus and Hippolyta exchanging words, Theseus makes his intentions obvious right from the beginning, letting the audience know immediately that he is besotted with Hippolyta and is finding it hard to endure the four more days and nights that he has to wait before he can wed her. Although he seems impatient, Hippolyta then shows that she has the ability to calm him down quite rapidly with just a few words, which demonstrates the power that she has over him almost as soon as the play has started, with Theseus’s mood changing from a lustful impatience to a softer more romantic mood with just one response from Hippolyta.

In this opening scene Theseus shows both his masculinity as he explains how he managed to win Hippolyta in battle, but also his loving and caring side, showing that he does understand the meaning of love to the audience, which is very important later on in the play. The quote below from Act 1 Scene 1 shows this:

THESEUS: “Hippolyta, I woo’d thee with my sword,

And won thy love, by doing thee injuries:

But I wed thee in another key,

With pomp, with triumph and with revelling.”

Although Hippolyta does not have much more dialogue until later on in the play, her simple presence is enough to alter the mindset of Theseus, a good example of this being shown in the same scene when Egeus is trying to persuade Hermia that she must marry Demetrius as apposed to Lysander, the man that she has already fallen in love with. Theseus gives her the option of obeying her Father, or death, which we get the feeling would have been the only two choices available before he’d met Hippolyta, but then he also gives her the choice of becoming a Nun, and then gives her time to pause for thought until the day of his marriage to Hippolyta.

Hippolyta is obviously a very strong character and she can be easily compared to Titania who is the Queen of the fairies, and who also shows that she has a certain amount of power over her male equivalent, Oberon. With this strength that she possesses we can also relate her strong mindedness to that of Hermia, who would rather flee from her home in Athens to be with the man that she loves instead of surrendering to her Fathers wishes.

Later on in the play we see some different reactions from Theseus to something that Hippolyta has said, for example when they are hunting Theseus describes the cry of his hounds, however Hippolyta  then recalls her experience with Hercules and Cadmus and describes how good their hounds were, much to Theseus’s dismay, as he then begins to show signs of jealousy and reacts by insisting that part of the play as it’s overshadowed by the discovery of the lovers in the forest, however in my opinion it’s another example of how Hippolyta can instantly change the mood of Theseus.

Another example of similar behaviour between the female characters within the play can also be seen in the rejection and calming of the seemingly sexual advances of both Theseus towards Hippolyta, and Lysander towards Hermia in the forest: Act 2 Scene 2

Now much beshrew my manners and my pride,

But Gentle friend, for love and courtesy

Lie further off, in human modesty……..”

This diplomatic and subtle approach is very similar to that used by Hippolyta in the opening scene and is yet more evidence that the women within the play act in a fairly similar way. The only character that does not follow the same type of role as Hippolyta is Helena, as she seems to be easily walked over and used by Demetrius, and even tries to entice Demetrius to love her by explaining to him that she would do anything asked of her, as loyally as a dog: Act 2 Scene 1

HELENA: “And even for that do I love you the more;

I am your spaniel and Demetrius,

This is quite obviously not the same role that the other women play, but it is even more noticeable because of the strength of them. If all the other women were lovesick and weak as Helena is portrayed, there wouldn’t be such an obvious contrast, so Helena plays a good part in that respect.

In conclusion I think that as Hippolyta is the first female character shown in the play, it is very important that she is depicted as a strong willed woman, who really sets the tone and the standard for which the other women seem to follow. It is very important that she is not shown to be weak and submissive as the audience would get entirely the wrong impression of the importance of these characters, and how they can influence the male characters in the play.