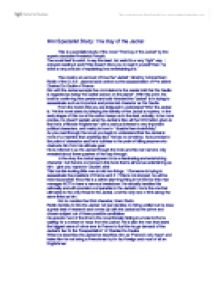 Mini Specialist Study: The Day of the Jackal

Mini Specialist Study: The Day of the Jackal This is a specialist study of the novel "The Day of the Jackal" by the superb storyteller Frederick Forsyth. The novel itself is weird, to say the least, but weird in a very "right" way. I enjoyed reading it and if this doesn't drive you to read it yourself then I've done a very poor job of explaining how entertaining it is. The novel is an account of how the "Jackal", hired by Colonel Marc Rodin of the O.A.S., planned and carried out the assassination of President Charles De Gaulle of France. Not until the Jackal accepts the commission is the reader told that De Gaulle is regarded as being "the safest person on the planet". With this point, the book is confirming how precise and cold-blooded the "Jackal" is in trying to assassinate such an important and protected character as De Gaulle. ...read more.

This humble looking little man is told two things: 1.Someone is trying to assassinate the president of France and 2. If this is not stopped, he will be held responsible. Now this is a rather alarming thing to be told but this man manages NOT to have a nervous breakdown. He actually handles this rationally and with precision comparable to the Jackal's. He is the one that ultimately is the only threat to the Jackal, and the only one o think along the same lines as him. Not to mention the third character, Marc Rodin. Rodin decides to hire the Jackal; not just decides on hiring a killer but he does a great deal of research and comes up with the Jackal as the prime and chosen subject out of three possible candidates. He spends most of the time in the novel literally hiding in a hotel in Rome waiting for a contact or news from the Jackal. ...read more.

The only character that is described in the traditional way is Claude Lebel and even he's described through the eyes of another man. I found the actions of the Jackal strange at first, which is probably exactly how Fredrick Forsyth meant it to be; Forsyth keeps this up until the last minute pulling you into reading more. The Climax itself is somewhat disappointing due to its brevity. Yet it seems to hit when you think back on the book - after you have finished it and have already turned your bedside light off. It's amazing how he achieved this effect because all the people I know that have read the book feel the same way. I was surprised by how quickly I read this book and how much I enjoyed it; it is different from the books I normally read (e.g. Terry Pratchett) which are light hearted and a rather "easy read". This book is not light hearted at all, because the actual plot is an assassination and the main character is a calculating, ruthless individual clad in mystery and cruelty. David Taricani ...read more.