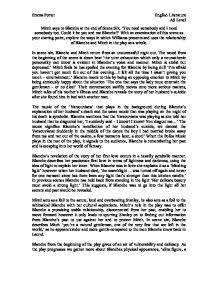 Mitch says to Blanche at the end of Scene Six, You need somebody and I need somebody too. Could it be you and me Blanche?(TM) With an examination of this scene as your starting point, explore the ways in which Williams presents and u

Mitch says to Blanche at the end of Scene Six, ‘You need somebody and I need somebody too. Could it be you and me Blanche?’ With an examination of this scene as your starting point, explore the ways in which Williams presents and uses the relationship of Blanche and Mitch in the play as a whole.

In scene six, Blanche and Mitch return from an unsuccessful night out. The mood from the beginning of the scene is down beat ‘the utter exhaustion which only a neurasthenic personality can know is evident in Blanche’s voice and manner. Mitch is stolid but depressed.’ Mitch feels he has spoiled the evening for Blanche by being dull ‘I’m afraid you haven’t got much fun out of this evening…I felt all the time I wasn’t giving you much – entertainment.’ Blanche reacts to this by being an opposing emotion to Mitch by being anxiously happy about the situation ‘The one that says the lady must entertain the gentleman – or no dice!’ Their conversation swiftly moves onto more serious matters, Mitch talks of his mother’s illness and Blanche reveals the story of her husband’s suicide after she found him in bed with another man.

The music of the ‘Varsouviana’ that plays in the background during Blanche’s explanation of her husband’s death and the same music that was playing on the night of his death is symbolic. Blanche mentions that the Varsouviana was playing as she told her husband that he disgusted her, ‘I suddenly said – I know! I know! You disgust me…’ The music signifies Blanche’s recollection of her husband’s suicide, we danced the Varsouviana! Suddenly in the middle of the dance the boy I had married broke away from me and ran out of the casino, a few moments later, a shot!’ When the Polka Music plays in the rest of the play, it signals to the audience, Blanche is remembering her past and is escaping into her world of fantasy.

Blanche’s revelation of the story of her first love occurs in a heavily symbolic manner. Blanche describes her passionate first love in terms of lightness and darkness, using the idea of light to explain her inner. When Blanche was in love she explains it as a ‘blinding light’ however when her husband died, ‘the searchlight …was turned off again and never for one moment since has there been any light that’s stronger than this kitchen candle.’  In previous scenes Blanche has held back from standing in the light ‘Her delicate beauty must avoid a strong light.’ This suggests, if Blanche was to go into the light all her secrets and past would be revealed.

Mitch acts as a foil to the astute, loud and overbearing Stanley, he also acts as a foil to the whimsical Blanche with her cultural aspirations. Mitch’s role in the play was to offer Blanche a promising stable relationship, disconnected from her past, enabling her to move forward however it only leads to spurring Stanley on to finding out information from Blanche’s past to use against her and to protect Mitch. In scene six, Blanche describes Mitch ‘you’re a natural gentleman, one of the very few that are left in the world,’ as he appears kinder and more gentle compared to the men Blanche knew back in Laurel.

Blanche from the beginning of the play gives of an air of vulnerability and delicacy. As the play progresses we gather more about Blanches physical appearance, ‘slim figure, a face of a delicate, fading beauty.’ Blanches character is complex as well as educated, ‘Only Poe! Only Mr Edgar Allan Poe! Could do it justice! ...Why that’s my favourite sonnet by Mrs Browning!’

We also learn Blanche is a heavy drinker, we learn the reason she resorts to alcohol in a time of risen tension or heightened emotions is due to her guilt of her husbands suicide and her promiscuity back in Laurel. Blanche also obsessively ‘bathes in the tub’ symbolically this symbolises her washing away her guilt and seeded past.

Blanche and Mitch first meet in Scene Three at Stanley’s Poker Night. Mitch shows an interest in Blanche from the moment he sees her, Stanley realises Mitch’s attraction to Blanche and calls him back to the poker game ‘He was looking through them drapes’ at Blanche.

Blanche’s conversation with Mitch near the end of this scene emphasises the difference in class between them and Blanche’s education ‘I appreciate your gallantry! … I attempt to instil a bunch of bobby-soxers and drug store Romeos with reverence of Hawthorne and Whitman and Poe!’ However despite being a lower class, Mitch makes an effort to over come it. Blanche she is interested him especially as he is not married and is desperate to attract Mitch, which is easily recognisable just by the artificiality and dramatic effect of Blanche’s words ‘I teach high school in Laurel…Never arithmetic sir! Never arithmetic!’

At the end of the scene Stanley attacks Stella, leaving Mitch to comfort Blanche; she is in awe of him as she recognises he desires her ‘Thank you for being so kind! I need kindness now.’

Scene Nine, Blanche is alone drinking heavily, trying desperately to silence the Polka music. Mitch arrives unexpectedly, which revives Blanche’s hopes however her hopes are quickly shattered as Mitch refuses to respond to her playful behaviour and Blanche realises Mitch’s attitude towards her has changed. Mitch, after hearing about Blanches past back in Laurel, accuses her of lying about her innocence and her age and he tells her what he knows about her past, ‘I was a fool enough to believe you was straight…I checked on the story. First I asked our supply man who travels through Laurel and then I talked directly over long distance to this merchant.’ Blanche responds by trying to explain her lies are in fact the real truth, but she realise Mitch does not understand her ‘Mitch stares at her dumbly.’ Throughout the scene there is a audible reminded of death as the Polka music plays throughout the scene but also a visual reminder death with the Mexican woman ‘Flores para los muertos’ which could symbolise the death of all of Blanche’s hopes and dreams.

Mitch is enraged about the lies and the charade of Blanche’s supposed old-fashioned morals. He grabs her and attempts to rape her, ‘[fumbling to embrace her] what I been missing all summer.’ Blanche replies thinking it would be what he’d want due to his actions, ‘Marry me, Mitch!’ However Mitch no longer wants to marry Blanche and replies to her as if she was a whore ‘You're not clean enough to bring in the house with my mother.’ Suggesting because she has slept around she is dirty and unclean. William’s uses the relationship between Blanche and Mitch to act as a catalyst in revealing Blanche’s past with her husband’s suicide and her slow downfall into madness as each part of her past slowly confronts her through her new love, Mitch.