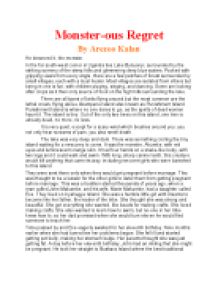 Monster-ous Regret. The lake was very deep and dark. There was something circling the tiny island waiting for a new prey to come.

﻿Monster-ous Regret By Arezoo Kalan He deserved it, the monster. In the far south-west corner in Uganda lies Lake Bunyonyi, surrounded by the striking scenery of the steep hills and glimmering deep blue waters. Packed with gripping views from every angle, there are a few patches of forest surrounded by small villages, each with a local healer. Most villages are isolated from others but being in one is fun, with children playing, singing, and dancing. Some are looking after crops as it their only source of food on the high hills surrounding the lake. There are all types of birds flying around but the most common are the lethal crows, flying above Akampene Island also known as Punishment Island. Punishment Island is where no one dares to go, as the spirits of dead women haunt it. The island is tiny. Out of the only two trees on this island, one tree is already dead, no more, no less. It is very quiet, except for a scary wind which brushes around you: you not only hear screams of pain, you also smell death. The lake was very deep and dark. There was something circling the tiny island waiting for a new prey to come. It was the monster, Akumbe, with red eyes and luminescent orange skin. It had four hands on a snake-like body, with two legs and it could walk and swim. ...read more.

John put Eve on the canoe and took her to Akampene Island and left his only child there. ?Eve, I am leaving you here to die because you disobeyed us,? exclaimed John. With that, he left. Eve fainted in disbelief. John didn?t care and started canoeing back. After two strokes; he froze, realizing what he had done. Tying to turn back, he had a heart attack, fell off the boat, and drowned. All of a sudden, there was a bright luminescent orange light all over the gloomy sky and then a big roar of fury. John had been cursed for sending his daughter to Akampene Island. With that he had been turned into a monster. Akumbe. After the roar Eve woke up not knowing that her dad had become a monster. She was so scared because she had never slept or done anything in the dark; she always had a candle. She sobbed until she almost choked, telling herself that she was not pregnant. She did not know what was wrong with herself but knew she was not pregnant. She had the pot-belly disease, but no one knew about that in her tribe. She tried to go to sleep. She was almost asleep when she suddenly heard a stick crack. She froze, noticing that the settled water was full of choppy waves. ...read more.

The water was choppy. They could see an outline of a bright orange creature getting closer. All of a sudden, the creature, Akumbe, bashed the canoes and they capsized. He ate each and every man and in just thirty seconds they were no. Marie got worried for whole eight hours because the search party hadn?t returned. She knew something was wrong. Not wanting to risk anyone else?s lives, she just gave up and wept. Her life was over. The sun was setting as Eve?s crow friends returned with a few fruits. She ate a banana and was full, so she tried to sleep. Pearl and the rest of the crows were already asleep. Eve knew this was the last night of her life; she saw the red eyes again and knew it was Akumbe. ?I?m here Eve. It?s time for you to die, Eve. Are you ready?? Akumbe hissed. He slithered towards her with his mouth open bite off Eve?s left leg. She tried to defend herself but couldn?t, it took two minutes for her own dad, Akumbe to eat her alive. ?NOOO!? At that very moment, a new crow landed on the tree. Akumbe sobbed and howled, regretting what he had done- killing people, the people of his own tribe. He howled after each of the many he had killed. To this day, he circles Akampene waiting to punish the new arrivals. In the dark of night, especially when the wind dies down you can hear Akumbe?s howls of regret. The tiny Punishment Island! ...read more.