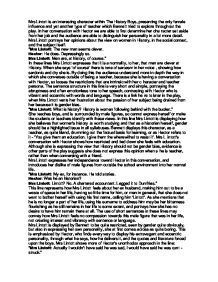 Mrs Lintott is an interesting character within The History Boys, presenting the only female influence and yet another type of teacher which Bennett tried to explore throughout the play. In her conversation with Hector we are able to first determine her character set aside from her job and the audience are able to distinguish her personality in a lot more detail. Mrs Lintott portrays her opinions about the view on women in History, in the social context, and the subject itself. "Mrs Lintott: The new man seems clever. Hector: He does. Depressingly so. Mrs Lintott: Men are, at history, of course." In these lines Mrs Lintott expresses that it is a normality, to her, that men are clever at History. When she says 'of course' there is tone of sarcasm in her voice, showing how sardonic and dry she is. ...read more.

Bennett displays this character, as a teacher, as quite bland, drumming out the factual basis for learning, or as Hector refers to it - 'You give them an education. I give them the wherewithal to resist it'. Mrs Lintott's conversation with Hector shows how restricted and tied down she feels with education. Although she is expressing the view that History should not be gender bias, evidence is other parts of the play suggests she does not express this opinion when she is teacher, rather than when conversing with a friend. Mrs Lintott expresses her independence toward Hector in this conversation, and introduces her dislike of male figures from outside the school environment into her normal life. "Mrs Lintott: My ex, for instance. He told stories. Hector: Was he an historian? Mrs Lintott: Lintott? No. A chartered accountant. Legged it to Dumfries." ...read more.

This is emphasized by Hector, who finds every way to display his extravagant and eccentric personality, through what he says, how he delivers it, and the quotes and literature forced upon the boys. Mrs Lintott shows more of Hector's unorthodox approach in the line: "Mrs Lintott: Actually I wouldn't have said he was sad, I would have said he was cunt-struck." This expresses Mrs Lintott's feels a sense of confinement in the school, demonstrated by not being able to use particular taboo language, but really conveying a more general restriction of her personality. By using this curse, she is able to let emotion out, which shows that her personality is constrained in the play by Bennett, but often portrays subtle hints of interest to Mrs Lintott. Overall the conversation between Mrs Lintott and Hector gives Alan Bennett the ability to express more underlying notions of the character, introducing attitudes and beliefs that form Mrs Lintott's personality. As the audience we are able to grasp her role within the plot and discover the depth to her character. ...read more.