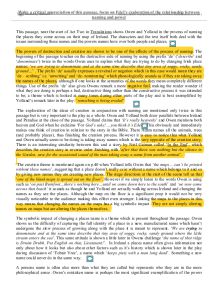 Naming and Power in Friel's Translations

Write a critical appreciation of this passage, focus on Friel's exploration of the relationship between naming and power This passage, near the start of Act Two in Translations shows Owen and Yolland in the process of naming the places they come across on their map of Ireland. The characters and the text itself both deal with the issues surrounding these names and the powers names have over both people and places. The powers of destruction and creation are shown to be one of the effects of the process of naming. The beginning of the passage touches on the destructive side of naming by using the prefix 'de' ('describe' and 'denominate') twice in the words Owen uses to explain what they are trying to do by changing Irish place names; 'we are trying to denominate and at the same time describe that tiny area of soggy, rocky, sandy ground...' . The prefix 'de' usually expresses a reversal or negation which in this case would mean they are 'de - scribing' i.e. 'unwriting' and 'de- nominating' which phonologically sounds as if they are taking away the names of the places, although if one looks at the semantics of the words they mean completely different things. ...read more.

However if we simply listen to the words Owen is using such as 'on past Burnfoot...there's nothing here...until we come down here to the south' and 'we now come across that beach' it sounds as though he and Yolland are actually walking across Ireland and changing the names as they see the places. Although the map on the floor is a significant prop it would not be very visually noticeable to the audience making this effect even stronger. Linking the maps to the places in this way means that changing the names on the maps has a big symbolic impact. They are not simply altering names on maps but are altering the places themselves. The symbolic impact of changing a places name is a theme which is present throughout the passage. Owen shows us the difficulty of capturing the full identity of a place in a new, manufactured name which hasn't undergone the slow process of growing along with the place it is meant to represent. 'We are trying to denominate and at the same time describe that tiny area of soggy, rocky, sandy ground where the little stream enters the sea'. This same attitude is shown a little later in Owens challenge 'the name of that ridge is Druim Drubh. ...read more.

The origin and meanings of their name give us yet more insight in to their character. Named after the rebel chieftain O'Donnell Ulster who tried to stop the Tudor conquest in 1598 the twins rebellious behaviour seems to be living up to their surname. Names have also been shown to have importance earlier in the play, for example in the first act when the name of the baby being christened would show the community who it's father was, another example of a name creating part of a persons identity. This idea has foundations in mythology. Knowing a persons true name is often said to either give one power over the person or to know the persons true 'essence' and self. Juxtaposed with the references to the pagan, mythological powers of names are references to their spiritual and religious side. Owens positioning in this scene is described in the stage directions as 'on his hands and knees', consulting the map. This could be interpreted as symbolising worship of the map and therefore of his country which fits in with the idea of Ireland as the holy land of Eden. His position over the map looks to the audience as if Owen is 'playing God' with this representation of Ireland. It portrays the process of naming as a holy act in itself, which would back up the idea of naming being a creative (or destructive) force. ...read more.

A strong conclusion. Overall, an articulate, perceptive commentary which illustrates effectively and addresses important details of staging. With better paragraphing, this would easily achieve the highest standard.