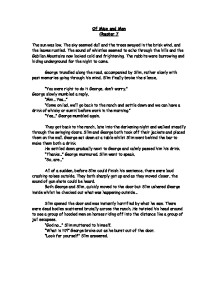 Of Mice and Men Chapter 7 The sun was low. The sky seemed dull and the trees swayed in the brisk wind, and the leaves rustled. The sound of whistles seemed to echo through the hills and the Gabilan Mountains now looked cold and frightening. The rabbits were burrowing and hiding underground for the night to come. George trundled along the road, accompanied by Slim, rather slowly with past memories going through his mind. Slim finally broke the silence, "You were right to do it George, don't worry." George slowly mumbled a reply, "Mm... Yea..." "Come on lad, we'll go back to the ranch and settle down and we can have a drink of whisky or sumin' before work in the morning." "Yea..." George mumbled again. They got back to the ranch, late into the darkening night and walked steadily through the swinging doors. Slim and George both took off their jackets and placed them on the wall. ...read more.

Candy lay there motionless, with his back up against the bunkhouse and wounds high up on his torso. His face looked unexplainable, for this man deserved not to die, and had some type of confused remark upon his pallid face. George got up and ventured slowly, dragging his feet, around the various bodies; Carlson, Buckett, Frankson. Then he stopped abruptly, standing over a slowly struggling body. He lent down. It was Curley. "I... I nearly.... had them," he blubbered. "Who? George asked promptly. "Those bastard...the bastards who just left!" He coughed heavily and George felt like he could hear the blood spluttering. "The rider that just left?" George continued/ "Ye... yea, those guys. Knowing that his time with George was slowly and desperately coming to an end, he asked George one final question, "Will you get them for me George?" "Yea... I guess" The bleak face in front of him smiled, but then limply dropped to the ground. But, it was different. ...read more.

"How? I only got myself 400 bucks, you need 500 don't you?" Slim questioned. "Well before Candy died, he wrote a will, giving me his possessions if he passed on and that was 350 bucks, so, how about it Slim?" "Ok then, we'll go in early afternoon." They both took their final trips around the ranch, picking up their final things for their new journey to begin. It was a dull summer afternoon, and the sun was visible over the trees. From the exit of the ranch, you could smell the sorrow of the moment, and dust was drifting off of the orange-coated path. They had a few hours of light left to travel in, so they agreed in beginning their journey. Suddenly, some hooded riders came galloping into view, like a pack of angry bulls, and as they got closer every second, they pulled out their guns and fired. It narrowly missed, and about 10 more riders pulled out their weaponry. Was this the end for George... but he noticed as they came into view, for they were not the bad boys from up north... they were the Soledad Police! By Josh Gill 10 S2 ...read more.