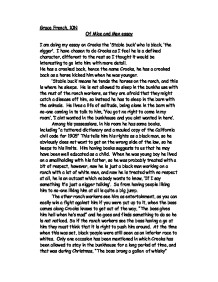 Of Mice and Men essay on Crooks character.

Grace French. 10N Of Mice and Men essay I am doing my essay on Crooks the 'Stable buck' who is black, 'the nigger'. I have chosen to do Crooks as I feel he is a defined character, different to the rest so I thought it would be interesting to go into him with more detail. He has a crooked back, hence the name Crooks, he has a crooked back as a horse kicked him when he was younger. 'Stable buck' means he tends the horses on the ranch, and this is where he sleeps. He is not allowed to sleep in the bunkhouse with the rest of the ranch workers, as they are afraid that they might catch a disease off him, so instead he has to sleep in the barn with the animals. He lives a life of solitude, being alone in the barn with no-one coming in to talk to him, 'You got no right to come in my room', 'I aint wanted in the bunkhouse and you aint wanted in here'. ...read more.

So from having people liking him to no-one liking him at all is quite a big jump. The other ranch workers see him as entertainment, as you can easily win a fight against him if you were put up to it, when the boss comes along Crooks knows to get out of the way, "The boss gives him hell when he's mad" and he goes and finds something to do so he is not noticed. So if the ranch workers see the boss having a go at him they must think that it is right to push him around. At the time when this was set, black people were still seen as an inferior race to whites. Only one occasion has been mentioned in which Crooks has been allowed to stay in the bunkhouse for a long period of time, and that was during Christmas, "The boss brang a gallon of whisky" through this all the workers would have been ...read more.

Crooks is able to tell things to Lennie that he usually wouldn't tell to anybody else, as he knows Lennie will not remember what he is saying. Crooks says to Lennie "Your Nuts" and "You're as crazy as a wedge" and he gets no reply from Lennie, for once in his life he can overpower a white man. However he does know that he has to tread on careful ground, as Lennie could explode with anger anytime, and he has enough power to do something harmful as we found out earlier where Lennie was overpowering Curly with one hand. Crooks knows when he is not wanted, and that he needs to get out the way when the boss is around. He tries to avoid all contact with white men as much as he can. If he is seen not working the boss will probably beat him so he just gets on with his life and stays out of other peoples so he does not get into trouble. ...read more.

This candidate shows very vague focus in their answer. It is not clear was the task here is. This shows the the candidate has not focused their answer well enough for somebody who has no knowledge of the question or ...

This candidate shows very vague focus in their answer. It is not clear was the task here is. This shows the the candidate has not focused their answer well enough for somebody who has no knowledge of the question or novel to understand what they are saying. This candidate should look to be more clear and precise with what they say, for as early as the first paragraph there are discrepancies which suggest either a poor quality of written communication of an insufficient understanding of the novel and the characters in it. "I have chosen to do Crooks as I feel he is a defined character, different to the rest so I thought it would be interesting to go into him with more detail." - this is not a very good introduction, and appears to suggest that none of the other characters have the depth that Crooks does, and whilst there is always room for personal interpretation in analytical responses, claiming something that quite clearly contradicts the authorial intentions is frankly wrong. Candidates must be clear and confident in how they write - "I thought that" sounds flimsy and not confident enough an introduction to base a whole piece of analysis on - it comes across as a fleeting thought, rather than an in-depth study.

The Level of Analysis is quite poor as it is not very apparent. This answer consists mostly of description and where the analysis is evident there is little evidence that successfully supports the theories. "Him having books suggests to us that he may have been educated well as a child (sic)". This is a very vague interpretation of something that has been examined very vaguely. The candidate should note that the book is a Civil Rights book, and this tells us that Crooks is very proud of his skin colour and 'knows his Rights'. This is so that, in the event of prejudice or an attack, he can prove to people that he is perfectly within his Rights as a staunchly law-abiding citizen. The reason he may have these books is not because he was educated as a child, but because of the prejudice he received because of his skin colour - he wanted to better himself by learning the law of the land and educating himself for the feeling of accomplishment, despite the prejudice he received; he wanted to prove he was a worthy citizen of America. The fact that the book is dated 1905 tells us that he, like so many other ranch hands, does not have the money to buy books, and so this one was probably found or given to him, and does not have sufficient funds to buy the updated version. This is the kind of analysis required of A Level students - a sensitive contextual appreciation of the social and historical factors that influenced the events and characters of the novel is fundamental for all A Level candidates.
The candidate may also want to consider their written clarity as an area for improvement -"He is not allowed to sleep in the bunkhouse with the rest of the ranch workers, as they are afraid that they might catch a disease off him (sic)". This is ambiguous, and suggests that the candidate shares similar views to the other ranch hands. The candidate should mention that the reason the other workers fear getting a disease off of Crooks is because he is black.

The Quality of Written Communication is quite poor. There is frequent misuse of grammar with comma splice and subordinate clauses made to stand alone as a sentence in their own right. This is primary school stuff and should not be an issue even for GCSE students, let alone A Level candidates. This is something that needs to be addressed because if the clarity of written expression becomes so poor that the examiners cannot understand the candidate's answer, they will be awarded zero marks.