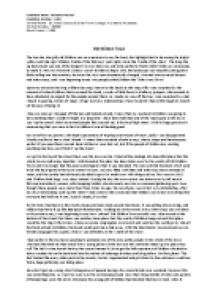 ﻿Candidate Name -Michaela Mitchell Candidate Number - 6310 Centre Name - St John's School & Sixth Form College, A Catholic Academy Centre Number - 43309 Word Count ? 1,695 Old Shildon Town The bus ride into jolly old Shildon was an experience to say the least; the highlight had to be seeing the bright yellow and blue sign ?Shildon, Cradle of the Railways? yeah right, more like ?cradle of the chavs?. The long ride up Busty Bank was one of the longest I?ve ever been on, and to be perfectly frank I didn?t think we were going to make it. The view from the window wasn?t terrible to begin with, the landscape was beautiful, deep green fields rolling one into another, however the view soon dramatically changed, it turned into terraced houses and take-aways, and I was beginning to see why people called Shildon the ?Take-Away Town?. Upon my arrival at the King William bus stop, known to the locals as the King Willy I was surprised by the amount of school children that swarmed the stand, crowds of little faces in Mulberry jumpers who seemed to have absolutely no regard for the people around them. As I made my way off the bus, I was surprised by what I heard in passing, stories of ?slags?, ?drugs? and new relationships; I have to admit I had a little laugh to myself, oh the joys of being 13. ...read more.

So to get the full experience of Shildon I decided to take a wander down the bank and into the realms of underage drinkers and drug takers. On first glance ?The Rek? looked like every other park in the country, but as I approached and got closer to the entrance I could see that a huge gathering was taking place. Now don?t get me wrong I don?t disapprove of people having a few social drinks on a weekend, however this was something else. As I cast my eyes over the communal ground I saw that cheap bottles of cider and packets of foreign fags were the norm. Obviously the young girls of Shildon had decided that less is more when it came to the clothes they were wearing. Short skirts, crop tops and platforms seemed to be the way forward in Shildon fashion, to be frank I felt quite over dressed in my jeans. I had to laugh though when three girls, one after another fell like dominos flat on their faces, and because of the amount of alcohol consumed they just lay with their legs in the air giggling. To be honest I was quite surprised that parents would allow their 13 year old children to drink on the streets, but I?m guessing by the classiness of the drink, I doubt their parents bought them it in the first place. ...read more.

I honestly think that every resident of the town had descended on Dean Street, the young and the old, all in Shildon colours. Inside the stadium I took my seat in the stand and was handed a pint and a cheeseburger and told ?ere you go honey, can?t beat this when you?re at the football?. I have to admit I was seeing the positive side of Shildon, and it surprised me, not everyone was an anti-social youth who drank and took drugs. With the chants in full swing and the game nearly at an end, I was shocked at how much I felt part of the Shildon Mad Dogs? tribe, and I couldn?t have been happier when the final whistle sounded and Shildon FC lifted the cup. My weekend in Shildon had been one that had definitely opened my eyes to how people live. On first glance the town looks like it?s full of youths who vandalise and drink and old people who sit in the town centre and intimidate new arrivals, which to some extent is true. However, I have come to learn that when it matters the people of Shildon can come together and do these things together, and that if you?re from Shildon you can point out the atrocious parts and call it every name under the sun, but if you?re not, be warned, the Shildon Mad Dogs don?t take things lightly. ...read more.