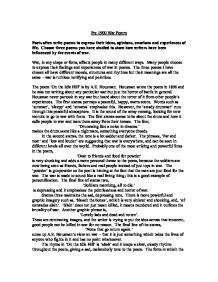 On the Idle Hill, The Drum and Drummer Hodge - Poets often write poems to express their ideas, opinions, emotions and experiences of life. Choose three poems you have studied to show how writers have been influenced by the events of war.

Pre 1900 War Poetry Poets often write poems to express their ideas, opinions, emotions and experiences of life. Choose three poems you have studied to show how writers have been influenced by the events of war. War, in any shape or form, affects people in many different ways. Many people choose to express their feelings and experiences of war in poems. The three poems I have chosen all have different moods, structures and rhythms but their meanings are all the same - war is ruthless terrifying and pointless. The poem 'On the Idle Hill' is by A.E. Housman. Housman wrote the poem in 1896 and he was not writing about any particular war but just the horror of battle in general. Housman never partook in any war but heard about the terror of it from other people's experiences. The first stanza portrays a peaceful, happy, warm scene. Words such as 'summer', 'sleepy' and 'streams' emphasise this. However, the 'steady drummer' cuts through this peaceful atmosphere. It is the sound of the army coming, looking for new recruits to go to war with them. The first stanza seems to be about the drum and how it calls people to war and tears them away from their homes. The line; 'Drumming like a noise in dreams.' ...read more.

The form in which the writer has set out the poem, in four stanzas, is effective because each one talks about a different aspect of war. This poem shows A.E. Housman's hatred of battle and how pointless and ruthless he thinks it is. War has obviously effected him deeply and we can see from his language throughout the poem that he feels very strongly about it. The poem 'The Drum' was written by John Scott, who was a Quaker. The significance of this is that according to Quaker beliefs, he was a pacifist and so was completely against war and violence. His poem concentrates on the famous recruitment drum which called people to was. He opens the poem directly by saying, 'I hate that drum's discordant sound,'. We immediately know what Scott's feelings about war are - he hates it. Even the rhythm is drum-like, as seen in the repetition of the word 'round'. This has a hypnotic effect, just like the drum was to knew recruits. Scott is bitter about the drum and criticises its ability to hypnotise young men, as seen in the phrase, 'To thoughtless youth it pleasure yields.' The poet is saying that the drum almost takes advantage of the young men. ...read more.

In summary, 'The Drum' shows John Scott's hatred of war. Being a pacifist, he obviously did not fight in any wars but he knew enough about them to know of the destruction and death which came with them. He has written the poem to express his views on war and also to try and dissuade people from going to them. 'Drummer Hodge' was written by Thomas Hardy after he read about a local drummer boy who had been killed at war. He thought how sad it was that a young boy, who didn't know the horror of war, should be buried in an alien landscape so far from home. The boy died in the Boer War (1899-1902), which took place in South Africa. The poem has a very pessimistic, sad tone. The first stanza is about how the young boy is buried. The phrases 'they throw' and 'uncoffined' suggest to us that no thought was put into his burial and he had no proper funeral. He wasn't even given the luxury of a wooden box, he was just thrown into a hole. Hardy emphasises the fact that he is miles away from home with the phrase 'foreign constellations.' The reader feels sorry for the poor boy, buried away from everything familiar to him. ...read more.