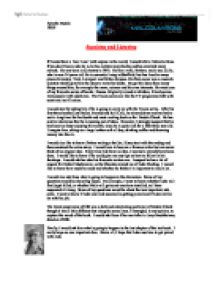 Speaking and Listening If I could have a 'one 2 one' with anyone in the world, I would talk to Malcolm Rose. If you don't know who he is, he has written many books and has received many awards. He was born in Coventry in 1953. He has a wife, Barbara, and a son, Colin, who is now 24 years old. He is currently living in Sheffield, but has lived in many places Coventry, York, Liverpool and Milton Keynes. His first career was a research scientist which gave him the ideas to write his books. He got his ideas from many things around him, for example the news, science and his own interests. ...read more.

He has said in interviews that he is running out of ideas. However, I strongly suspect that he has been too busy enjoying his wealth, since he is quite rich for a fifty three year old. I imagine him, sitting on a large leather sofa all day, drinking coffee and throwing money into the air. I would also like to know if when writing a thriller, if you start with the ending and then construct the crime story. I would love to become a famous writer but can never think of an original idea. Every time I do have an idea, it seems to already have been done. ...read more.

Some of my questions would be about the less important, sub-plots. I want to know if Luke and Jade succeed in getting paired and if Luke carries on with his job. The latest programme of CSI was a dark and entertaining portrayal of Double Check though it was a little different but along the same lines, it managed, in my opinion, to capture the mood of the book. I would ask Rose if he ever talks to Jerry Bruckheimer, director of CSI. Finally, I would ask him what is going to happen in the last chapter of the last book. I really hope no one important dies. Above all, I hope that Luke survives to get paired with Jade. ?? ?? ?? ?? Ayiesha Buckle 10HP ...read more.