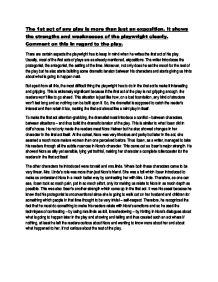 Opening act of &quot;A doll's house&quot;. The 1st act of any play is more than just an exposition. It shows the strengths and weaknesses of the playwright clearly. Comment on this in regard to the play.

The 1st act of any play is more than just an exposition. It shows the strengths and weaknesses of the playwright clearly. Comment on this in regard to the play. There are certain aspects the playwright has to keep in mind when he writes the first act of his play. Usually, most of the first acts of plays are as already mentioned, expositions. The writer introduces the protagonist, the antagonist, the setting of the time. Moreover, not only does he set the mood for the rest of the play but he also starts building some dramatic tension between his characters and starts giving us hints about what is going to happen next. ...read more.

To make the first act attention-grabbing, the dramatist must introduce a conflict - between characters, between situations - and thus build the dramatic tension of the play. This is similar to what Ibsen did in doll's house. He not only made the readers meet Nora Helmer but he also showed changes in her character in the first act itself. At the outset, Nora was very frivolous and perky but later in the act, she seemed a much more mature woman than one perceived before. Thus Ibsen, as a writer, managed to take his readers through all the subtle nuances in Nora's character. This came out as Ibsen's major strength. He showed Nora as silly yet sensible, lying yet truthful, making her character a complete rollercoaster for the readers in the first act itself. ...read more.

It was his asset because he knew that his protagonist is unconventional since she is going to walk out on her husband and children for something which people in that time thought to be very trivial - self-respect. Therefore, he recognized the fact that he must do something to make his readers relate with Nora's emotions and so he used the techniques of contrasting - by using mrs.linde as foil, foreshadowing - by hinting in Nora's dialogues about what is going to happen later in the play and showing and telling and thus created such an act where if nothing, at least he left the readers curious about Nora and wanting to know more about her and about what happened to her, if not curious about the rest of the play. ...read more.