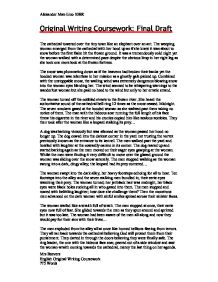 Original Writing Coursework: Final Draft The cathedral towered over the tiny town like an elephant over an ant. The weeping woman

Original Writing Coursework: Final Draft The cathedral towered over the tiny town like an elephant over an ant. The weeping woman emerged from the cathedral with her hood up as if she knew it was about to snow before the first flake hit the frozen ground. It was a tremendously cold night yet the woman walked with a determined pace despite the obvious limp in her right leg as she took one more look at the frozen fortress. The snow was plummeting down as if the heavens had broken their banks yet the hooded woman was relentless in her mission as a ghostly gale picked up. Combined with the unstoppable snow, the wailing wind was extremely dangerous blowing snow into the woman eyes blinding her. The wind seemed to be whispering warnings to the wanderlust woman but she paid no heed to the wind but only to her erratic errand. ...read more.

Whilst the men were finding it very difficult to move over the glazed ground the woman was sliding over the snow serenely. The men stopped walking as the woman swung into a dark, dingy alley; the leopard had its prey cornered... The woman swept into the dark alley, her heavy footsteps echoing for all to hear. Ten footsteps into the alley and the seven stalking men bundled in, their eerie eyes watching their prey. The woman turned; her jet black hair was midnight, her black eyes were black holes sucking all in who gazed into them. The men stopped and roared with belittling laughter; how dare she challenge them? Then the monstrous men advanced on the dark woman with sinful smiles spread across their sinister faces. The woman wailed like a wraith full of wrath. The men stopped at once, their eerie eyes now full of fear. ...read more.

The men gazed into the abyss that was her wretched mouth as they saw all their dreams crushed and all their nightmares relived. Each man sang like a choir of sin and madness, a different sound for the cathedral which usually housed choirs of purity and serenity. The woman-wraith closed her mouth as the men shivered and started blankly, their eyes that of a voodoo victim or one who has had an experience with a traumatic experience. The woman-wraith then put her bony, pale hand into her robe and drew out a knife. Every curve and point on the knife was made from malice. The knife then clattered the cathedral floor... A short man in a blue beret came storming from the shadows scream 'CUT, CUT' at the top of his lungs. The lights at the top of the cathedral blasted full beam as the actress who was the woman-wraith wiped the make-up from her face.... ?? ?? ?? ?? Alexander Max-Lino 10BR Mrs Beevers English Original Writing Coursework 775 Words ...read more.