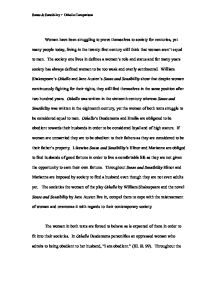 Othello + Sense &amp; Sensibility comparision. William Shakespeares Othello and Jane Austens Sense and Sensibility show that despite women continuously fighting for their rights, they still find themselves in the same position after two hundre

Women have been struggling to prove themselves to society for centuries, yet many people today, living in the twenty-first century still think that women aren't equal to men. The society one lives in defines a women's role and status and for many years society has always defined women to be too weak and overly sentimental. William Shakespeare's Othello and Jane Austen's Sense and Sensibility show that despite women continuously fighting for their rights, they still find themselves in the same position after two hundred years. Othello was written in the sixteenth century whereas Sense and Sensibility was written in the eighteenth century, yet the women of both texts struggle to be considered equal to men. Othello's Desdemona and Emilia are obligated to be obedient towards their husbands in order to be considered loyal and of high stature. If women are unmarried they are to be obedient to their fathers as they are considered to be their father's property. Likewise Sense and Sensibility's Elinor and Marianne are obliged to find husbands of good fortune in order to live a comfortable life as they are not given the opportunity to earn their own fortune. Throughout Sense and Sensibility Elinor and Marianne are imposed by society to find a husband even though they are not even adults yet. The societies the women of the play Othello by William Shakespeare and the novel Sense and Sensibility by Jane Austen live in, compel them to cope with the mistreatment of women and overcome it with regards to their contemporary society. The women in both texts are forced to behave as is expected of them in order to fit into their societies. In Othello Desdemona personifies an oppressed woman who admits to being obedient to her husband, "I am obedient." (III. iii. 99). Throughout the play Desdemona follows her husband's orders, despite his insults towards her. She continues to be a dutiful wife when he commands her to go to bed and till the end where she accepts his decision to kill her. ...read more.

He is driven by society to please women but not care for them and at the end his flawed propensity leads him to being punished by not being able to be with the one he loves. Similar to Othello's Iago Willoughby does not think highly of women. Both Iago and Willoughby are villains of the story because of their harsh behaviour towards women. Although Iago shows no remorse for hurting women whereas Willoughby regrets his dishonesty towards the women in his life, they both are still seen to be of the same nature because of their character's being so deceptive towards women. Furthermore Elinor is also a victim of mistreatment. "She now found that, in spite of herself, she had always admitted a hope, while Edward remained single, that something would occur to prevent his marrying Lucy....But he was now married; and she condemned her heart for the lurking flattery which so much heightened the pain of the intelligence."(Jane Austen, 194). Elinor's thoughts express how hurt she is by the news of the her love's marriage. Edward Ferrars is someone the reader would least expect to hurt a woman but his loyalty towards Lucy Steele and unplanned love for Elinor lead him to having to choose between the two women. Knowing that either way he will hurt someone, he chooses to be with Lucy in order to be keep the promise of marrying her and not be hated by society for leaving her. One cannot help but blame Edward for leading Elinor on and not letting her know about his engagement with Lucy. Although Othello's killing Desdemona is very extreme compared to Edward's choosing Lucy over Elinor, both characters invoke catharsis in the audience because of the situation the characters find themselves in. Othello is driven to kill Desdemona because of his role in society and what society might think of him if they were to find out that his wife has cheated on him. ...read more.

By doing this she is able to prove to society how strong women are as she dies protecting her friend's honour. William Shakespeare depicts how even though society portrays women as irrelevant people during his time, they still have a great impact on the lives of men. Elinor takes a more restrained approach to fight society's beliefs of women. She accepts to behave as expected of her but does not allow that to change the way she thinks. As a result Elinor learns that she does not always need to approach everything with common sense and she is able to learn to let herself go sometimes. Marianne starts off being the opposite of Elinor, as her being younger and more emotional prevents her from understanding the necessity of being accepted by society. By the end she is able to accept her role in society but at the same time she does not let her sensibility go. Jane Austen shows how that even though there is parallel of both Dashwood sisters fighting society and trying to find love at the same, they both approach it differently and at the end they decide to embark the same route. Jane Austen depicts how a balance between sense and sensibility allows women in the eighteenth century to not only be a part of society but also have a more dominant role as a woman. Though there is a large difference in the period both these texts were written in, the women still struggle with the same problems. Living in the year two thousand and eleven, yes there has been some improvement in how women are treated but that hasn't changed the way men think. Women are still not strong enough or not brave enough in the minds of men. It's still rare for you to see a women as a president or prime minister. After centuries of fighting for their rights women still have a long way to go to prove their strength and capability to men and society. ?? ?? ?? ?? Sense & Sensibility + Othello Comparison ...read more.