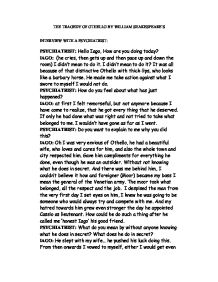 THE TRAGEDY OF OTHELLO BY WILLIAM SHAKESPEARE'S INTERVIEW WITH A PSYCHIATRIST: PSYCHIATRIST: Hello Iago, How are you doing today? IAGO: (he cries, then gets up and then pace up and down the room) I didn't mean to do it. I didn't mean to do it? It was all because of that distinctive Othello with thick-lips, who looks like a barbary horse. He made me take action against what I swore to myself I would not do. PSYCHIATRIST: How do you feel about what has just happened? IAGO: at first I felt remorseful, but not anymore because I have come to realize, that he got every thing that he deserved. If only he had done what was right and not tried to take what belonged to me. I wouldn't have gone as far as I went. PSYCHIATRIST: Do you want to explain to me why you did this? IAGO: Oh I was very envious of Othello, he had a beautiful wife, who loves and cares for him, and also the whole town and city respected him. ...read more.

PSYCHIATRIST: Do you thing you over reacted towards Othello? IAGO: Over reacted! Me! I don't think so. I did what every man in the city would have done if they found out that "an old black ram" like Othello has slept with their wife. PSYCHIATRIST: Were you in anyway in love with Desdemona? IAGO: Me in love with Desdemona, hell no she wished. Well a couple of years back before she got married to Othello I kind of confessed my love for her but she rejected me. Since she married Othello I then lost interest. So when I found out what Othello has done with my wife I lust for her for a couple of week's maybe months but, since I wasn't able to get my revenge by sleeping with her, because of what her husband done in order to get even with him, I lost interest. PSYCHIATRIST: Don't you think that you hated Othello because Desdemona truly loved him and she turned you down? IAGO: Not at all, I mean why don't need women. ...read more.

PSYCHIATRIST: So I understand that you were good friends with Othello. Why were you good friends with him if you were so envious of him? IAGO: I wasn't friends with the man. Of course not! How could I ever be friends with some who has a moor-ship ancient? He just picked me as his close friend from the very first day he met me, just because I had to work hand in hand with him and introduce him to the job. And now PSYCHIATRIST: Why did you trick Roderigo that he had a chance with Desdemona? IAGO: Stupid Roderigo, what chance did he thing he had with Desdemona. I mean Desdemona has already told him about that. And every body told him about Othello and Desdemona's marriage so I don't know why he came back to me and asked me about the marriage. So because I knew that he was in love with Desdemona and also I hated the moor bitterly I had to play along with the game ...read more.