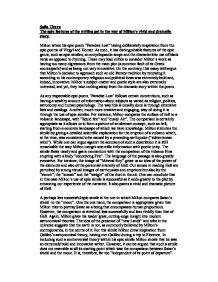 Paradise Lost. The epic features of the writing get in the way of Milton's story. Discuss.

Sofia Thuru The epic features of the writing get in the way of Milton's vivid and dramatic story. Milton wrote his epic poem "Paradise Lost" taking deliberately inspiration from the epic poems of Virgyl and Homer. As such, it has distingushable features of the epic genre, such as epic similes, an encyclopaedic scope and the characteristic use of blank verse as opposed to rhyming. These may lead critics to consider Milton's work as having too many digressions from the main plot (a common fault of its Greek counterparts) and as being not very innovative. On the contrary, this essay will argue that Milton's decision to approach such an old literary tradition by renewing it according to his contemporary religious and political ideas was extremely bold and, indeed, innovative. Milton's subject-matter and poetic style are also extremely universal, and yet, they take nothing away from the dramatic story within the poem. As any respectable epic poem, 'Paradise Lost' follows certain conventions, such as having a wealthy amount of information about subjects as varied as religion, politics, astronomy and human psychology. ...read more.

However, the comparison is stretched less successfully and less vividly than that of Hell. Again, Milton gives his reader great, cutting-edge insight into modern astronomical theories. The idea of the presence of "new Lands" and orbs in the universe suggests that the earth is not, as commonly believed by Milton's contmporaries, in the centre of it. For this simile Milton drew inspiration from Galileo's astronomical theory, having met Galileo during a trip to Florence. In including such a controversial theory within his epic simile Milton shows that he was an extremely bold and innovative writer. However, it can be argued that such a simile does not resemble at all its starting point which was the comparison between Satan's shield and the moon. It is, therefore, far too "independent of its point of departure". On the other hand, one can argue that the inclusion of such a detail gives the poem a greater and more universal scope. As suggested, these digressions "contribute... to the inclusiveness of epic". Moreover, they are typical of Milton's search for truth in order to explain the very beginning of existence and of good and evil. ...read more.

Moreover, the fact that blank verse resolves at the end of a passage adds a sense of speed and of pressing forward. For instance, in order to resolve the phrase beginning with "Of man's first disobedience..." the reader has to reach, 5 lines later, the phrase "Sing Heav'nly Muse". It can be argued that Milton's regular blank verse keeps the plot moving forward. Had he choose a less metrical way of writing the narrative would have probably been much less effective and dramatic. Another method employed by Milton in order to add lyricism and intensity to his lines is by exploiting the richness of language. His description of Hell is a good example, in which he plays with the reader's imagination by describing concrete concepts combined with abstract ones, such as "darkness visible" and "burning lake". To conclude with, Milton's use of epic features in writing does not diminish the vividness nor the dramatic impact of the plot within the poem. By contrast, they greatly adds to it while, at the same time, giving a sense of grandeur and universality. In view of the ambitious subject-matter of the poem, I believe that Milton has chosen the most appropriate form of writing to go with the story of the fall of man. ...read more.