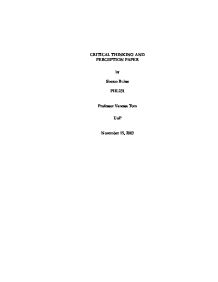 CRITICAL THINKING AND PERCEPTION PAPER by Sharon Buhse PHL251 Professor Vanessa Tom UoP November 19, 2003 Perception is reality! Oh really? A couple of years ago, I witnessed what I thought was a man having trouble getting into his car. There was a man that must have been in his mid 60's tugging on his door handle to his car. I watched him try to fit his arm into a small opening in the widow on the passenger side of the car. Because of the age of this man, it never entered my mind that this man was trying to break into this car to steal it. Another thing that didn't fit the profile of a car thief was the way the man was dressed. He was dressed in a sports jacket and was wearing fairly decent trousers with nice shoes. I walked over to the man and asked him if there was anything I could help him with or if he needed to call someone. ...read more.

As I was walking back to my desk, I glanced out the window and saw him looking around as he continued to fit his arm in the window by pulling his sleeves up. I walked over to the receptionist and asked her what position the man had applied for, and she looked at me asking me what man I was talking about. I described him to her and told her I had just spoken to him in the parking lot to offer him help because he had either lost or locked his keys in the car. She had no idea who I was talking about, which I thought was strange, because she is the one that hands out applications. I walked over to the window and looked outside again to see if the man had gotten into his car yet. He was still there so I pointed the man out to the receptionist the man over by the white two door cavalier. ...read more.

During this five minute time frame, someone had called the police and the man was stopped about a half of a mile down the road, but hit one of the police cars before stopping and did a lot of damage to the car. I have never felt so bad. If I had not let the man's appearance fool me, I might have been able to prevent the whole thing from happening, but then again, had I not questioned the receptionist and supervisor, the car would have been long gone. I learned basically; don't judge a book by its cover. Now when I see someone that is not familiar in the parking lot when I'm outside, or when I see someone in our building that I don't know, I ask the receptionist. Our division did not have very strict rules before of people coming in and out of the building, but now we have a guest sign in sheet and the nature of their business. This may not stop someone from trying to do this again, but then again it just might. 4 ...read more.