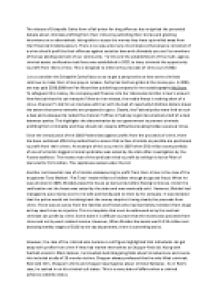 Persusive writing - Criminals should not profit from their crimes.

Transfer-Encoding: chunked ﻿The release of Schapelle Corby form a Bali prison for drug offences has re-ignited the perennial debate about criminals profiting from their crimes by publishing their stories and granting interviews on or alternatively being able to access the money they have squirrelled away from their financial misdemeanours. There is no way under any circumstances that anyone convicted of a crime should profit by their offences against societies laws and ultimately you and I as members of the law abiding element of our community. To this end the establishment of the multi- agency criminal assets confiscation task force was established in 2011 to deny criminals the opportunity to profit from theirs crimes. This is designed to enforce the proceeds of crime out of 2002. Let us consider the Schapelle Corby fiasco so as to get a perspective on how some criminals continue to make their crimes pay on release. ...read more.

An example of this occurred in 2007 when $50 million asset portfolio of one of victoria?s biggest criminal syndicates was seized by the state after investigation by the Purana taskforce. The money man of the syndicate tried to profit by selling his horse Pillar of Hercules for $1.5 million. This capital was seized under the Act Another controversial case of criminals endeavouring to profit from their crimes is the case of the drug baron Tony Mokbel. ?Fat Tony? made millions of dollars through drugs and fraud. When he was arrested in 2005, Mokbel placed his house as bail surety before fleeing to Greece. Under the confiscation act the house was seized by the state and was eventually sold. However, Mokbel had managed to pass money over to his wife and family paid to them by his company. It was declared that the police would not be taking back the money despite it being clearly the proceeds from crime. ...read more.

Reid sold CD?s, Chopper t-shirts and chopper board games about criminal fantasies. So in Reid?s case, he cashed in on his criminal cult status. This is a sorry state of affairs when a criminal achieves celebrity status. There has been speculation as to how confiscated money should be spent and this in itself is a reason to ensure that criminals do not profit from their crimes. To this end Western Australia has set the pattern with its use of confiscated money. In 2013, $1.8million was seized from the confiscation of criminal assets and this went to worthy causes. The upshot of this is if the Federal government designates special projects for criminal money there and will be great effort to establish that any money gained by criminals Is denied them to ensure that they do not profit. Thus, it patently obvious that criminals must be placed in a position where there is no chance of profits what so ever from their crimes. We as a nation cannot let this happen and the message must be sent loud and clear to criminals. ...read more.