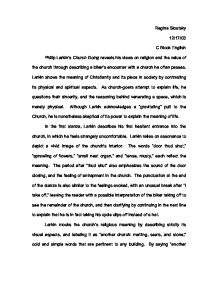 Regina Sloutsky 12/17/03 C Block English Philip Larkin's Church Going reveals his views on religion and the value of the church through describing a biker's encounter with a church he often passes. Larkin shows the meaning of Christianity and its place in society by contrasting its physical and spiritual aspects. As church-goers attempt to explain life, he questions their sincerity, and the reasoning behind venerating a space, which is merely physical. Although Larkin acknowledges a "gravitating" pull to the Church, he is nonetheless skeptical of its power to explain the meaning of life. In the first stanza, Larkin describes his first hesitant entrance into the church, in which he feels strangely uncomfortable. Larkin relies on assonance to depict a vivid image of the church's interior. The words "door thud shut," "sprawling of flowers," "small neat organ," and "tense, musty," each reflect the meaning. The period after "thud shut" also emphasizes the sound of the door closing, and the feeling of entrapment in the church. The punctuation at the end of the stanza is also similar to the feelings evoked, with an unusual break after "I take off," leaving the reader with a possible interpretation of the biker taking off to see the remainder of the church, and then clarifying by continuing in the next line to explain that he is in fact taking his cycle clips off instead of a hat. Larkin mocks the church's religious meaning by describing strictly its visual aspects, and labeling it as "another church: matting, seats, and stone;" cold and simple words that are pertinent to any building. ...read more.

As he poses the possibility of letting "the rest rent-free to rain and sheep," Larkin shows the ultimate dominance of nature over religion. Thus, he reveals his perspective on religion; its relative phoniness and parallel to superstition. Larkin is convinced that nature will take its course regardless of religion, and that the future is predetermined. Through the use of alliteration, Larkin allows the stanza to flow and thus shows the reader the simplicity of leaving religion, and the plain, fast life that it will leave behind. The "parchment, plate, and pyx," as well as "let the rest rent-free to rain" both serve to make the stanza have a smooth sound. The pause that occurs from the line break after "if we shall keep/a few cathedrals" is an important characteristic of Larkin's poetry. Until the reader reaches the next line, there is a different meaning to the phrase "if we shall keep," in which Larkin ponders the human capacity to survive without religion. However, he brings the reader back the physical, discussing the cathedrals and their interiors, avoiding the issue of religion. In the next stanza, Larkin continues his consideration of religion's future. After the downfall of the churches, Larkin mentions that "dubious" women will come. By using the word "dubious," Larkin shows that those that currently rely on religion are uncertain, and are searching for a way to explain life, and therefore use Christianity as a means of hope and explanation. ...read more.

In the final stanza, Larkin personifies "compulsions" to show that people are merely using the church as a means of justifying their destinies. He implies the inexistence of destiny; that they are impulses which humans are apt to label as inevitability. By using the word "gravitating," Larkin implies that this pull is not a willful act, but rather something that we cannot control. Larkin goes back to the idea of superstition when he explains that people see an appeal in churches is their supposed power, which is in reality an excuse for viewing Christianity as a guide. Larkin refutes the transforming power of traditional Christian faith, yet affirms the sacramental power churches hold on human imagination. In them, he finds his hunger or yearning for the mysterious and the secret most nearly answered: "some will forever be surprising / A hunger in himself to be more serious." According to Parkinson, "The connotations of the words in Larkin's poem are used to disarm the skeptical reader of his own skepticism for long enough to persuade him to admit the necessity and legitimacy of metaphysical speculation" (231). Thus, "Church Going" is one of Larkin's poems where the visionary moment is most nearly realized and least affected by skepticism often evident in his other work. Larkin's view of religion is constant throughout his poetry; in Aubade he says, "Religion used to try,/that vast moth-eaten musical brocade created to pretend we never die." In this poem he similarly implies society's reliance on religion, while in reality it is merely a pretense. 1 2 3 Page 59 4 Parkinson 229 ...read more.