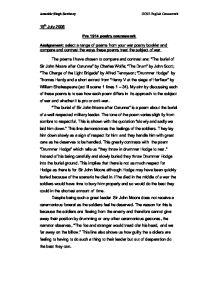 15th July 2006 Pre 1914 poetry coursework Assignment: select a range of poems from your war poetry booklet and compare and contrast the ways these poems treat the subject of war The poems I have chosen to compare and contrast are: "The burial of Sir John Moore after Corunna" by Charles Wolfe; "The Drum" by John Scott; "The Charge of the Light Brigade" by Alfred Tennyson; "Drummer Hodge" by Thomas Hardy and a short extract from "Henry V at the siege of Harfleur" by William Shakespeare (act III scene 1 lines 1 - 34). My aim by discussing each of these poems is to see how each poem differs in its approach to the subject of war and whether it is pro or anti-war. "The burial of Sir John Moore after Corunna" is a poem about the burial of a well respected military leader. The tone of the poem varies slightly from sombre to respectful. This is shown with the quotation "slowly and sadly we laid him down." This line demonstrates the feelings of the soldiers. They lay him down slowly as a sign of respect for him and they handle him with great care as he deserves to be handled. ...read more.

This is saying that the speaker is lying and that the army is not as the speaker makes the youth to believe. John Scott picks up on the idea of the drum appealing to the youth especially because they are naive. "To thoughtless youth it pleasures yields," this highlights the age group it is appealing to. The poem has a rhythm very similar to that of a drum. There is emphasis on the first two lines of the poem which are repeated in the first two lines of the second stanza. "I hate that drum's discordant sound, Parading round and round and round." This may be to keep the rhythm going and to reinforce the poet's view of the Drum. The first stanza is talking about what people are promised "And lures from cities and from fields." However the second stanza is reality "And burning town, and ruined swains." This is a clever technique as it gives the reader the impression that not everything is as it seems. The poet, John Scott may have been in the army and found it hard and therefore is warning people to not make the same mistake. He feels his life is ruined as the second stanza explains "And all the misery's hand bestows." ...read more.

Like Henry V speech it has a strong sense of honour in being in the army and also says that people in the army are remembered "when will their glory fade?" This poem is also exaggerated like the speech to give people the idea that war is good and if you are in the army you are doing everybody proud. This poem is pro war and bears similarities with the Henry V speech and "The burial of Sir John Moore after Corunna" in its ideas about war. The five poems all differ in their approach to war but share similarities in their ideas about war. The Burial of Sir John Moore after Corunna shares its ideas about heroism and glory about war with Henry's speech which although may use it in different context is giving people the idea that they will become heroes like Sir John Moore. Henry V's speech and The Charge of the Light Brigade share a similarity in that they both have a strong sense of honour and patriotism. Drummer Hodge and Sir John Moore After Corunna share the idea of death in war but the people who die are treated very differently Sir John Moore is treated with up most respect and Hodge is thrown in a communal burial with no real ceremony or respect. ?? ?? ?? ?? Amanbir Singh Sawhney GCSE English Coursework ...read more.