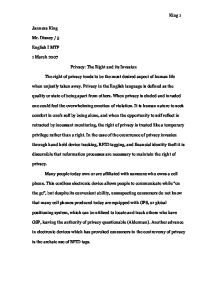 Privacy. In the case of the occurrence of privacy invasion through hand held device tracking, RFID tagging, and financial identity theft it is discernible that reformation processes are necessary to maintain the right of privacy.

Janneza King Mr. Disney / 5 English I MYP 1 March 2007 Privacy: The Right and its Invasion The right of privacy tends to be the most desired aspect of human life when unjustly taken away. Privacy in the English language is defined as the quality or state of being apart from others. When privacy is eluded and invaded one could feel the overwhelming emotion of violation. It is human nature to seek comfort in one's self by being alone, and when the opportunity to self reflect is retracted by incessant monitoring, the right of privacy is treated like a temporary privilege rather than a right. In the case of the occurrence of privacy invasion through hand held device tracking, RFID tagging, and financial identity theft it is discernible that reformation processes are necessary to maintain the right of privacy. ...read more.

Another advance in electronic devices which has provoked consumers in the controversy of privacy is the archaic use of RFID tags. RFID tags, or Radio Frequency Identification tags, are commonly used today for security reasons at places where shoplifters peregrinate, but recently scientists have been discovering other uses for the diminutive devices. RFID tags are now being used to keep track of inventory, replace barcodes, substitute as car keys, and even reform passports. These RFID tags emit constant signals which allow receiving devices from afar to determine the location and time spent in past locations of the device carrying the tag. Just recently scientists have found a way to replace passports with electronic RFID tags. ...read more.

More Americans each day are falling victim to identity theft, leaving them frustrated and demanding advances in security rather than convenience. Many credit card distributors administer contactless credit cards which allow consumers to purchase products without checking for ID or asking for signatures, as long as the amount is under twenty-five dollars (Bigda, 40). These cards are also traceable and can give away locations with tacking technology in malicious hands. Privacy is a right that should be respected and incorporated in the lives of humans today. The demand of privacy as an included aspect of new technology has pronounced the lack of personal location privacy as well as corporate and military security that United States citizens have today. Methods of reformation need to be initiated to alleviate the vulnerability of merchandisers, and to indemnify the outlook of privacy as an eternal right instead of a temporary privilege. ...read more.