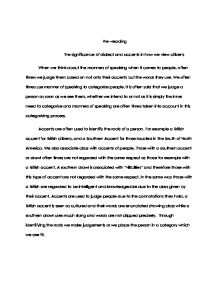 Pygmalion - the significance of accents and the characters of Eliza and Henry.

Pre -reading The significance of dialect and accents in how we view citizens When we think about the manners of speaking when it comes to people, often times we judge them based on not only their accents but the words they use. We often times use manner of speaking to categorize people. It is often said that we judge a person as soon as we see them, whether we intend to or not as it is simply the inner need to categorize and manners of speaking are often times taken into account in this categorizing process. Accents are often used to identify the roots of a person. For example a British accent for British citizens, and a Southern Accent for those located in the South of North America. We also associate class with accents of people. Those with a southern accent or drawl often times are not regarded with the same respect as those for example with a British accent. A southern drawl is associated with "Hillbillies" and therefore those with this type of accent are not regarded with the same respect. In the same way those with a British are regarded to be intelligent and knowledgeable due to the class given by their accent. ...read more.

She grows strong despite Higgins's insults directed toward her accent and vocabulary. She becomes a more independent character as she throws Higgins's shoe at him as an act of defiance when he neglects her, something she would have wanted to but never would have done prior to her transformation. She becomes more courageous as the play progresses when she runs away from Higgins and spends the night with Freddy. However a part of her is still the same innocent person who thinks her aunt was killed so that someone could have her hat. Liza remains innocent however she becomes braver and less defensive. Shaw would categorize Liza as a dynamic character of interest and humour as Liza is quite amusing in her daily antics but she is also quite intelligent by the manner in which she picks up on changing her cockney accent. She is also brave and fierce despite her poverty and her survival makes her admirable. 2) Henry Higgins, also a debatable protagonist of the novel, is a teacher of dialects ad accents. He works with Eliza for a bet that entails he makes her like a duchess. ...read more.

But my ego does not define me." Director - "Good, now remember be confident but do not be uptight. Higgins's character is aloof and confident and snarky but he is not uptight in any way. Good luck." I chose to do Higgins's character because I found that Higgins's could often be misinterpreted. I don't in anyway believe, as shown above, that Higgins holds malice or wants to hurt anyone in any way I simply think he doesn't understand people's emotions as most would. He has no concern for weak people in his opinion but I believe he also is a kind man as he does in the end seem to care for Eliza as a friend. He is not a mean man purposely, he simply doesn't understand that he is mean because he knows himself to just be honest. He is also a confident person as showed many times in the play, for example when he claims that the only reason Eliza was able to be a duchess was because of his skill and not her determination, however his ego isn't massive as he does understand that Eliza was a good student with a good ear as she learnt how to speak like a duchess. ...read more.