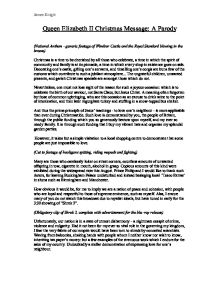 Queen Elizabeth II Christmas Message: A Parody (National Anthem - generic footage of Windsor Castle and the Royal Standard blowing in the breeze) Christmas is a time to be cherished by all those who celebrate, a time in which the spirit of community and family is at its pinnacle, a time in which every shop in existence goes on sale. Decorating one's castle, gifting one's servants, and tinselling one's corgis are but a few of the customs which contribute to such a jubilant atmosphere... The ungrateful children, unwanted presents, and garish Christmas specials are amongst those which do not. Nevertheless, one must not lose sight of the reason for such a joyous occasion: which is to celebrate the birth of our saviour, not Santa Claus, but Jesus Christ. A meaning often forgotten by those of common upbringing, who see this occasion as an excuse to drink wine to the point of intoxication, and then later regurgitate turkey and stuffing in a snow-topped bus shelter. ...read more.

Waving from balconies, shaking hands with people whom I neither know nor wish to know, inheriting tax payer's money: but a few examples of the strenuous work which I endure for the sake of my country. Undoubtedly a stellar demonstration of expressing love for one's neighbour. The common folk of our country have previously proven hindersome to communities, with their spray paint and lacklustre futures. However this year this has changed, with the marriage of my grandson William, and his wife Kate - or should I say Catherine as she so prefers. She may be a royal, but she is still a mere laywoman is the eyes of the aristocracy. Despite the many elegant Princesses and majestic Duchesses whom I attempted to marry William off to, he instead settled with a commoner with rich parents. He really could have done better, but it's better Kate than never, I suppose. (Cut to footage of The Royal Wedding, mainly plebs frantically waving miniature union jacks) ...read more.

We should take time, this Christmas, to reassure those whom have suffered the hardships of financial loss, including those irritating carolers begging for small change. But with such tribulation, we are only strengthened. We are a proud nation, we may moan, but we are proud. Some express this pride through celebration, and some express it through harsh xenophobia and degrading racism. But still we have managed to maintain our composure, as a family; together enduring obstacles such as rioting, terrorism, recession and disastrous coalition. Through my faith, and through the support you have given me, I continue to serve my country with utmost aspiration. Even to those who mock my accent, those who see me as nothing more than a device for tourism, and the Sex Pistols: I am thankful, for you are the catalyst behind my efforts. I wish you all a very happy Christmas. Unless you are of other religions, in which case absolutely no offence was intended, and you may continue with your heretical customs. (Fades to uniformed men with brass instruments playing typical patriotic themes.) Word Count - 1,054 James Knight ...read more.