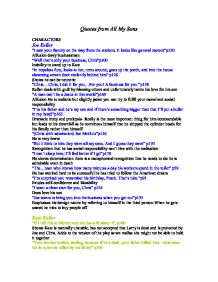 Quotes from All My Sons

Quotes from All My Sons CHARACTORS Joe Keller "I saw your factory on the way from the stations. It looks like general motors"p150 Allusion-Savy businessman "Well that's only your business, Chris"p100 Inability to stand up to Kate "in hopeless fury, looks at her, turns around, goes up the porch, and into the house slamming screen door violently behind him" p126 Shows he can be neurotic "Chris... Chris, I did it for you...For you! A business for you."p158 Keller deals with guilt by blaming others and unfortunately taints his love for his son "A man can't be a Jesus in this world"p169 Allusion He is realistic but slightly jaded you can try to fulfil your moral and social responsibility "I'm his father and he's my son and if there's something bigger than that I'll put a bullet in my head!"p163 Dramatic irony and prolepsis- family is the most important thing for him commendable but leads to his downfall as he convinces himself that he shipped the cylinder heads for his family rather than himself "(Chris with admiration) Joe McGuts"p116 He is very brave "But I think to him they were all my sons. And I guess they were" p170 Recognition that he has social responsibility can't live with the realisation "I can't sleep here; I'll feel better if I go"p170 He shows determination there is a metaphorical recognition that he needs to die he is admirable even in death "The...man who knows how many minutes a day his workers spend in the toilet" p59 He has worked hard to be successful he has tried to follow the American dream "I'm surprised you remember his birthday, Frank. That's nice."p91 Exudes self-confidence and likeability "I want a clean start for you, Chris" p124 Does love his son "Joe wants to bring you into the business when you get out"p135 Emphaises his benign nature by referring to himself in the third person-When he gets scared he tries to buy people off Kate Keller "If I tell this ...read more.

studied a certain disease. It was beautiful. And then she came, and she cried. And I went back home with her. And now I live in the usual darkness" p160 Repetition of she and her Jim neglected being true to himself "The star of one's honesty... he probably just wanted to be alone to watch his star go out"p160 Simile Lack of honesty from all characters even eventually Chris "It's wrong to pity a man like that. Father or no father"p117 Colloquial Lack of forgiveness from Ann and initially George "I said he's dead.I know!"p165 Ann shows moral responsibility when she bravely tries to convince broken pscyotic women that her son is dead as she has found out "I can't bear to live anymore"p169 Larry can't forgive "I want you to set him free and then I promise you everything will be at an end"p164 Metaphor Ann tires of moral responsibility "I can't look at you this way. I can't look at myself"p169 Can't emphasised Chris finds it hard to forgive and stay true to himself "A man can't be a Jesus in this world"p169 Allusion Keller lies about Steve and his involvement with the faulty parts Social responsibility "I'm his father and he's my son and if there's something bigger than that then I'll put a bullet through my head"p163 Irony and bathos Keller's initial delusion about social responsibility his journey through the play is the discovery that there is more than this "But I think to him they were all my sons. And I guess they were" p170 Recognition that he has social responsibility can't live with the realisation "To him the world had a forty-foot front; it ended at the building line"p163 Shows Larry initially ignored his social responsibility "I can't bear to live any more"p169 Realises he has social responsibility and that he has been indirectly forced by his father to neglect this but does he neglect his social responsibility by killing himself taking a pilot away from benefiting his country? ...read more.

"I'm not going to do anything about it" Throughout almost all of the play Chris, Anne and Kate represent Joe's defence.Chris suddenly becomes a prosecutor, voicing his fury and shame to his father Perhaps here we see a highly uncaring side of Anne, as she will gladly let her father rot in prison even though she now knows that he is innocent. Religion "Every Sunday ought to be like this"p90 The play starts on a sunday morning which is a religious time of the week "chris" Chris' name could be interpreted as 'Christ' which would suggest a kind of moral superiority that he at least tries to achieve "downstage, stands the four-foot high stump of a slender apple-tree whose upper branches lie toppled beside it, fruit still clinging to its branches"p89 The apple tree is incredibly important in terms of religious symbolism. It obviously has connotations of the tree of knowledge - the tree which was in the story of Adam and Eve. It's significant that it's there as it is an indication of the 'fall' that's about to happen (in the same way that eve fell from god's grace by eating the apple). It represents in this sense the knowledge of Larry's death and the real causes. "living next door to the holy family" p131 The tree is a holy symbol however it is broken.the broken tree signifies that in reality, the Keller's aren't as 'holy' as they seem. "the trouble with you is that you don't believe in anything" "now I live in the usual darkness" My personal opinion is that Jim represents non belief in terms of religion. The idea that he lives in darkness suggests that there is no light from religion in his life. And perhaps his unhappiness is a result of this non belief. Although, as an alternative interpretation, you could say that the way he admires Chris ("he meets a man and makes a statue out of him" p131) and the fact that Chris could be interpreted as 'Christ' means that he isn't a total non believer. ...read more.