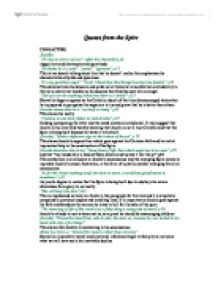 Quotes from the Spire

Quotes from the Spire CHARACTERS Jocelin "He shot an arrow of love" (after the chancellor) p8 Agape love and shows patronising attitude "He thinks he's a saint" "proud" "ignorant" p13 This is two dean's talking about him that he doesn't realise this emphasises his characteristics of pride and ignorance "It is my guardian angel" "Lord; I thank thee that though has kept me humble" p22 This demonstrates his delusion and pride as he thinks he is humble but contradictory to this he is clearly not humble as he assumes that God has sent him an angel "Did you see-see anything behind me there as I knelt?" p25 Shows his huge arrogance as the Catholic church of the time disencouraged visions but he is prepared to go against his superiors to try and prove that he is better than others (Jocelin claims that he is "not half as beaky" p23 This shows his vanity "I believe in one God- father in God Jocelin" p27 Golding juxtaposing the letter and the creed creates an antiphonal. It may suggest that Jocelin is his own God thereby showing that Jocelin is not a true Christian and that the Spire is being built because he wants it to be built (Jocelin) "Made a defensive sign at the bottom of the pit" p 79 This shows Jocelin's superstition which goes against his Christian faith and his initial impractical help in the construction of the Spire (Jocelin describes the pit as) "Some form of life, that which ought not to be seen" p79 and that "two hands bore a head of Dean Jocelin and hurled it into the pit" p81 This symbolism is an allusion ...read more.

p100 Emphasises how little respect she has for the dean Pangall "One day they will kill me" Prophetic builds sympathy "Twig lying across his shoe, with a rotting berry that clung obscenely to the leather p95 Jocelin knows that pangall is dead but refuses to consciously accept it "Poor Pangall, crouched beneath the crossways, with a sliver of mistletoe between his ribs?"p212 Alliteration emphasises pity Father Adam "One forgets you are there so easily... I shall call you Father Anonymous" That Father Adam ignores this comment shows his respect for the church hierarchy They have been called dangerous and incomprehensible" Misogynistic faithful to church teachings Father Anselm "A lamentable lack of faith, my Lord" p33 Ironic statement "You were all over my knees like a dog" p 200 Shows cold unsympathetic side "The same sort as you, if you like. Minimal" p202 Cynical "I have said what I have said" Arrogant echoes Pontius pilot foreshadows his blunt truths to Jocelin "Why shouldn't he see him as he is?" Question emphasises Anslem's cunning nature Lady Alison (Hopes her maker will "vouchsafe his unworthy handmaid many more years of living death to repent in" Shows her realistic attitude in contrast to Joclein's disillusioned one (When she cries her voice still sounds) light and amused" Shows she can keep up appearances in contrast to Jocelin "It was half generosity. She was so,so pious, so dreary" p184 Tricolon emphasises that Jocelin was promoted partly due to a motivation of revenge something which is very unchristianly "You must believe, Jocelin! P186 Emphasises her generosity Visitor "The questions drove him back in his chair" Emphasises the visitor's cunning Workmen "Animal bodies"p90 Reduces humanity "Murderers, cutthroats, ...read more.

with a sliver of mistletoe between his ribs" Alliteration emphasises his empathy for pangall and his realisation that Pangall was sacrificed by the builders as part of a pagan sacrifice Tent "The invisible tent was shut around them" Beginning of Goody's and Roger's affair Ark "My stone ship" Irony suggests it's indestructible "There is no good thing in all this circle but the great house, the ark, the refuge, a ship to contain all these people and now fitted with a mast" Jocelin views himself as the leader of goodness in a bad world "As the whole building itself, the bible in stone, it sank from glory to homilectics" Shows the ark sinking under normality and adultery Rope "It was Goody, half turned ,unblinking; feeling the ropes pull, shaking her head, Goody terrified and athirst, Goody and Roger " Tricolon emphasises Goody and her conscious and Jocelin's is emphasised through the allusion to the rope which is eluded to as conscious in Isaiah and Mark "Like a dead snake" On Pangall's grave shows Jocelin's conscious for Pangall's death "Fallen in snakes" Rachel's hair is a symbol of consciences he realises he has destroyed her life by rendering Roger a suicidal alcoholic Pit Jocelin "made a defensive sign at the bottom of the pit" Shows that pagan influence still widespread from Jocelin's reaction "Two hands bore a head of Dean Jocelin and hurled it into the pit" in which is "some form of life, that which ought not to be seen" Symbolism that the pit has a clear connection with Jocelin's unconscious "The darkness under the earth, turning, seething, coming to the boil" Shows that Jocelin's unconscious will become conscious ...read more.