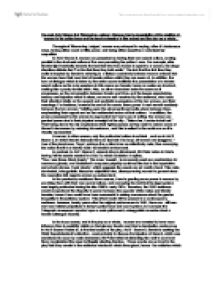 Re-read Act 2 Scene 6 of Murmuring Judges. Discuss Hares presentation of the position of women in the police force and the legal profession in this extract and the play as a whole.

Re-read Act 2 Scene 6 of 'Murmuring Judges'. Discuss Hare's presentation of the position of women in the police force and the legal profession in this extract and the play as a whole. Throughout 'Murmuring Judges', women are portrayed in varying, often dichotomous ways, having either much or little power, and being either assertive or submissively coquettish. In Act 2 Scene 6, women are presented as having their own secret culture, running parallel to the dominant culture of the men pervading the police force. For example, after Sandra light-heartedly laments the fact that Irina has chosen to speak to a woman, the stage directions dictate that "For the first time they both smile." The fact that the first time they smile is inspired by Sandra's referring to a liaison exclusively between women evinces that the women have their own kind of female culture which they are aware of. In addition, the form of dialogue which is taken by the entire scene facilitates the presentation of a female secret culture as the only speakers in this scene are female, hence no males are involved, making this a purely female affair. ...read more.

Most clearly." The noun, 'assets', is commonly used as a euphemism for mammary glands, and Cuddeford's response palpably confirms this due to the superlative and adverb phrase, 'most clearly', which suggests the assets are primarily visual. This male-dominated, misogynistic discourse objectifies Irina, disempowering women in general since the masculine talk regards women as subservient. In the previously mentioned three scenes, Hare is granting more power to women by providing them with their own secret culture, and conveying the fact that the legal system was largely patriarchal during the late 1980's-early '90's. Therefore, the 1991 audience would comprehend the disparity in power between the superior white males and inferior females, hence Hare would have been successful in raising awareness about the gender inequality in the judiciary system. This effect would still be present in a contemporary audience, because, twenty years after the original performance in 1991, there are still sex- and race-related prejudices in today's police force and court system; for example the Telegraph newspaper reported upon a male policeman's misogynistic remarks about a female colleague recently. ...read more.

In Act 2 Scene 3, the two women in the scene, Sandra and Esther, can be identified into two stereotypes: Sandra is the archetypal assertive, apparently independent woman, and Esther, the flirtatious coquette of the males (for instance, she play along with Lester's 'vagina dentata' joke, declaring, "yeah, I've had fantastic bridgework"). However, Sandra's influence grows as the scene progresses into a dialogue between Sandra and Barry, akin but concurrently different to how Sandra and Irina engage in a dialogue in the focus scene, in that women hold power throughout that scene, whereas Barry's obstinacy born by his opinionated, monochrome views, causes a fluctuation in power between the man and the woman, reflecting a real-life power struggle between the sexes in the police force and in the courts. The fact that the power oscillates between Barry and Sandra is Hare's giving women more power than in reality they had, and still do have, albeit to a greater extent today, since men had more power than women in the courts and the police force, which consist of a greater proportion of men than women. ...read more.

Well written with some insightful comments. Takes into account setting and stage directions as well as dialogue. Explores the roles of men and women in the police force and is aware of how the playwright is manipulating audience reaction. Some repetition of words, phrases and ideas but overall the essay is an intelligent and thoughtful response to the question.