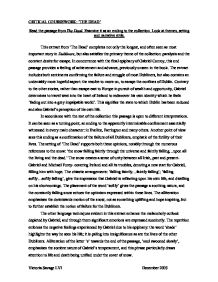 Read the passage from The Dead - Examine it as an ending to the collection. Look at themes, setting and narrative style.

CRITICAL COURSEWORK: 'THE DEAD' Read the passage from The Dead. Examine it as an ending to the collection. Look at themes, setting and narrative style. This extract from 'The Dead' completes not only the longest, and often seen as most important story in Dubliners, but also satisfies the primary theme of the collection: paralysis and the constant desire for escape. In concurrence with the final epiphany of Gabriel Conroy, this end passage provides a feeling of achievement and advance, previously unseen in the book. The extract includes both sentiments confirming the failure and struggle of most Dubliners, but also contains an undeniably more hopeful aspect: the resolve to move on, to escape the confines of Dublin. Contrary to the other stories, rather than escape east to Europe in pursuit of wealth and opportunity, Gabriel determines to travel west into the heart of Ireland to rediscover his own identity which he feels 'fading out into a grey impalpable world'. This signifies the state to which Dublin has been reduced and also Gabriel's perception of his own life. In accordance with the rest of the collection this passage is open to different interpretations. ...read more.

death is not only of the passing from life, but also the death of the soul, and of the will to live. His soul had approached that region where dwell the vast hosts of the dead...the solid world itself...was dissolving and dwindling. Gabriel begins to lose sight of his sense of being; he has become disillusioned by thoughts of his wasted life. He feels isolated by the realisation that his life has been squandered; his existence seems 'dead', and it hardly pains him to 'think how poor a part he, her husband, had played in [his wife's] life.' Although Gabriel does not resent Michael Furey, knowledge of him instigates thoughts of failure and dejection, and highlights what he lacks, thus the language of the passage denotes his frame of mind. The descriptive words used in these paragraphs symbolise the resignation Gabriel experiences, 'pity', 'dangled', 'limp', echoing the view he has of his life. 'The Dead' is narrated in the third person, and so the sentiments expressed are not exclusively those of the main character, Gabriel Conroy. However, a common style of Joyce is to convey the individual's thoughts or feelings not through dialogue but through narration, resulting in the reader viewing occurrences objectively as though perceived by one directly involved. ...read more.

Gabriel seems determined to make something of the remainder of his life, and is struck poignantly as he realises that he has never experienced love: 'tears gather thickly in his eyes' and darkness pervades, obscuring his vision. Gabriel does not let the absence of this vital sense deter his resolve, and though 'his own identity was fading' decides to venture on a journey of self discovery and revival. This absence of vision is common throughout Dubliners, and explains their repeated failure to escape. In 'Clay' Joe's vision is also blurred due to the pity he feels towards Maria. She will die as described in the extract: 'fade and wither dismally with age.' As an ending to Dubliners this passage from 'The Dead' creates a sense of ambiguity; it combines the primary themes of the book with a suitable sense of finality: consolidating the idea of entrapment, whilst also suggesting a progression away from the restrictive nature of Dublin. Joyce uses setting and language to enforce the dismal nature of Dublin in the early twentieth century, and through narrative style the personal thoughts of Gabriel are clearly expressed. This final extract clarifies for the reader the mortality of all humans, and leaves them with either an impression of anticipation and hope or of an overpowering paralysis occupying Dublin. ...read more.