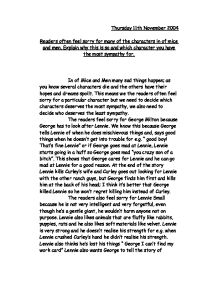 Readers often feel sorry for many of the characters in of mice and men. Explain why this is so and which character you have the most sympathy for.

Thursday 11th November 2004 Readers often feel sorry for many of the characters in of mice and men. Explain why this is so and which character you have the most sympathy for. In of Mice and Men many sad things happen; as you know several characters die and the others have their hopes and dreams spoilt. This means we the readers often feel sorry for a particular character but we need to decide which characters deserves the most sympathy, we also need to decide who deserves the least sympathy. The readers feel sorry for George Milton because George has to look after Lennie. We know this because George tells Lennie of when he does mischievous things and, says good things when he doesn't get into trouble for e.g. " good boy! That's fine Lennie" or if George goes mad at Lennie, Lennie starts going in a huff so George goes mad "you crazy son of a bitch". This shows that George cares for Lennie and he can go mad at Lennie for a good reason. At the end of the story Lennie kills Curley's wife and Curley goes out looking for Lennie with the other ranch guys, but George finds him first and kills him at the back of his head; I think it's better that George killed Lennie so he won't regret killing him instead of Curley. ...read more.

When she asked him to touch her hair, Lennie wouldn't let go of Curley's wife's hair "But mine is soft and fine" (hair) and when Lennie wouldn't go of Curley's wife's hair she started screaming but Lennie covered her mouth and broke her neck and she dies. I also think that Curley's wife's is a tart when George enters the room she starts talking to him and starts lifting her skirt up, she does this to any one of the ranch workers "well I think Curley's married ... a tart" Crooks is black and he's disabled readers feel sorry for him because no one talks to him, he has to sleep in the stable buck, he also has to do everything in his room like reading, if he wants to go in the yard he has to wait till everyone's gone in the bunk house or gone out when George came in his room he said "I don't what you're doing in the barn anyway" this shows at first Crooks doesn't want Lennie to come in his room but after a while he told him to sit down "set down, set down on that nail peg" this shows that Crooks is lonely and jumps to the chance to talk to Lennie. ...read more.

The Characters are lonely for a reason crooks was black so no one would talk to him. Curley's wife was lonely because she couldn't talk to ant one apart from Curley , Candy ended up lonely after Carlson shoot his dog . Finally at the end of the story George becomes lonely after he shot Lennie because he didn't want Curley to shoot Lennie so he wouldn't regret it. The character I don't feel sorry for is Curley because ,when Curley's wife died all he wanted to do is kill Lennie to get revenge back Lennie at for what he had done to his hand he wasn't at all in agony , that his wife died. It felt like Curley wasn't bothered and I think that Curley thinks he can get any wife he wants. The character I feel sorry for the most is Curley's wife. I feel sorry for Curley's wife because she's not allowed to talk to anyone apart from Curley. Curley's wife has to stay at home and can't go out without asking Curley and I know that Curley's wife doesn't have any freedom. If she didn't marry Curley and she received that letter she could have been a glamorous Hollywood actress. ?? ?? ?? ?? ...read more.