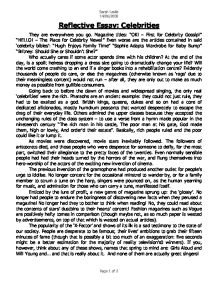 Reflective Essay: Celebrities They are everywhere you go. Magazine titles: "OK! - First for Celebrity Gossip!" "HELLO! - The Place for Celebrity News!" Even worse are the articles contained in said 'celebrity bibles': "Hugh Enjoys Family Time" "Sophie Adapts Wardrobe for Baby Bump" "Britney: Should She or Shouldn't She?" Who actually cares if some actor spends time with his children? At the end of the day, is a spoilt heiress dropping a dress size going to dramatically change your life? Will the world come crashing to an end if a singer books into a rehabilitation centre? Evidently thousands of people do care, or else the magazines (otherwise known as 'rags' due to their meaningless content) would not run - after all, they are only out to make as much money as possible from gullible consumers. Going back to before the dawn of movies and widespread singing, the only real 'celebrities' were the rich. ...read more.

The previous invention of the gramophone had produced another outlet for people's urge to idolise. No longer content for the occasional minstrel to wander by, or for a family member to strum a tune on the harp, singers were pounced on, as the human yearning for music, and admiration for those who can carry a tune, manifested itself. Enticed by the lure of profit, a new genre of magazine sprung up: the 'glossy'. No longer had people to endure the boringness of discovering new facts when they perused a magazine! No longer had they to bother to think when reading! No, they could read about the contents of stars' dustbins to their hearts' content! Fashion magazines such as Vogue are positively hefty tomes in comparison (though maybe not, as so much paper is wasted by advertisements, on top of that which is wasted on actual articles). The popularity of the 'X-Factor' and shows of its ilk is a sad testimony to the state of our society. ...read more.

Being the not entirely photogenic person that I am, perhaps I am predisposed to dislike those who have been airbrushed beyond belief, and am slightly bitter. It is true that one of my friends, who is normally quite sensible, and who never has a bad photograph taken of her, does like to flick through a celebrity magazine once or twice a week to keep abreast of the top gossip. Is it because she looks good herself without being airbrushed? I do not know. When will our obsession with celebrities end? Personally, I think that it is a part of our nature to harbour infatuations and to idolise people. Maybe if more people were religious and idolised God instead then our mania would cease. In times, however, when tens of thousands of dollars are paid for a picture of a celebrity's baby, and new glossy magazines spring from newsagents' shelves every week, I do not think it will stop for a very long time. Word Count: 841 words ?? ?? ?? ?? Sarah Leslie 14/06/2008 Page 1 of 2 ...read more.