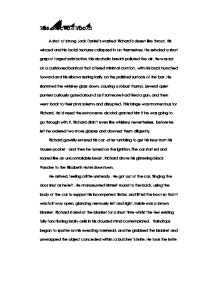 Resurrection Room A shot of strong Jack Daniel's washed Richard's desert-like throat. His winced and his facial features collapsed in on themselves. He exhaled a short gasp of forged satisfaction; his alcoholic breath polluted the air. He was sat on a cushioned barstool that offered minimal comfort, with his back hunched forward and his elbows resting lazily on the polished surface of the bar. He slammed the whiskey glass down, causing a robust thump. Several quiet punters curiously gazed around as if someone had fired a gun, and then went back to their pints solemn and disrupted. This binge was momentous for Richard. He'd need the extra nerve alcohol granted him if he was going to go through with it. Richard didn't even like whiskey; nevertheless, before he left he ordered two more glasses and downed them diligently. Richard gawkily entered his car -after fumbling to get his keys from his trouser pocket - and then he turned on the ignition. ...read more.

He caught himself instinctively on a nearby pillar and quickly regained his balance. After a few seconds the doors slid open and Richard climbed inside. Gazing down at the hefty tree of numbers corresponding to the various floors, Richard tried desperately to remember the room number she had given him. He closed his eyes and tried to focus, 'was it 6012, or 5012? It's got to be one of those' he thought to himself. He placed his left hand on his head and punched angrily against the button panel with his right; incidentally the number six became illuminated. The doors closed shut. When Georgia opened the door - after Richard had knocked and waited eagerly on the opposing side- the first thought that crossed her mind was not that her death was drawing close. She felt not panic, instead she was thrilled and glad he had finally arrived. She had waited patiently in just her dressing gown for him to give her the time of her life and then gently whisk her away to a distant land. ...read more.

By this time tomorrow, Richard would be abroad; gone without a trace. Richard turned the door handle and pulled the door to open it. It wouldn't move. He muttered curses under his breath and checked the lock. It wasn't locked. "I don't have time for this shit!" he muttered loudly, and yanked the door violently, but it failed to open. Richard stood confused. All of sudden, Richard became encased in blackness as the lights in the room turned off. Richard listened to the unsteady gasps of his own breathing. Beyond this, Richard could hear another sound; splashing water and soft thuds against a wet laminate surface. He turned around. His heart stopped. By the silver gaze of the moon peeking through the curtains, he witnessed the bloody naked corpse of his former lover, leaning seductively against the doorframe of the bathroom, her legs crossed and her hand on her hip. She cracked a wide malicious smiled. "Coming for a bath, darling?" she asked, "The water's getting awfully cold". ?? ?? ?? ?? ...read more.