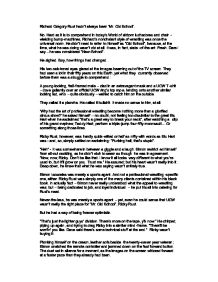 Richard Gregory Rust hadn't always been 'Mr. Old School'. No. Hard as it is to comprehend in today's World of airborn luchadores and chair-wielding bump-machines

Richard Gregory Rust hadn't always been 'Mr. Old School'. No. Hard as it is to comprehend in today's World of airborn luchadores and chair-wielding bump-machines, Richard's nonchalant style of wrestling was once the universal norm. He didn't need to refer to himself as "Old School", because, at the time, what he was doing wasn't old at all. It was, in fact, state-of-the-art. Fresh. Dare I say - he was considered "New-School". He sighed. Boy, how things had changed. His two oak-toned eyes glared at the images beaming out of the TV screen. They had seen a lot in their fifty years on this Earth, yet what they currently observed before them was a struggle to comprehend: A young-looking, frail-framed male - clad in an extravagant mask and a UCW T-shit - dove gallantly over an official UCW ring's top rope, landing onto another similar looking lad, who - quite obviously - waited to catch him on the outside. ...read more.

Trust me." He assured; but his heart wasn't really into it. Deep down, he knew that what he was saying wasn't entirely true. Simon Isosceles was merely a sports agent. And not a professional wrestling-specific one, either. Ricky Rust was simply one of the many clients contained within his black book. In actually fact - Simon never really understood what the appeal to wrestling was; but - being dedicated to job, and loyal individual - he put his all into catering for Rust's need. Never-the-less, he was merely a sports agent - yet, even he could sense that UCW wasn't really the right place for "Mr. Old School", Ricky Rust. But he had a way of being forever optimistic. "That's just the lighter guys' division. There's more on the tape, y'know." He chirped; piping up again, and trying to drag Ricky into a similar mind-frame. ...read more.

As the sound of the tape's commentators nattering away about "Dragon Suplexes" and "Stiff American Strong-Style" buzzed irritating on his eardrum, Ricky casually exhaled; before dryly stating: "So that's what passes for technical wrestling these days". He put the cigarette to his lips once more. "Oh, come on Rick. Show some enthusiasm. This is probably an old tape, anyway. UCW's probably different, now. Probably more...y'know... your style" Was Simon's last ditch attempt at getting Ricky interested. And "...Probably" was Ricky's flat reply. The conversation was over. No more was, or could, be said to attempt to change the aged wrestler's mind. That's just the way Ricky Rust was - Ridged. Deeply set in his ways. But he was going into UCW. Underground Championship Wrestling. A place that claims to be "A break from Tradition". And as Simon settled into the sofa to watch the rest of the tape; he couldn't help but wonder if a man like Ricky could ever bring himself to adapt. 'He better', Simon thought. Because if he couldn't...He wouldn't even stand a chance. ...read more.