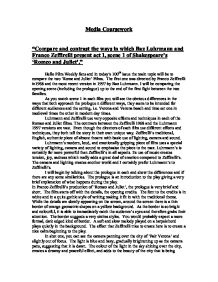 Media Coursework "Compare and contrast the ways in which Baz Luhrmann and Franco Zeffirelli present act 1, scene 1 of Shakespeare's 'Romeo and Juliet'." Hello Film Weekly fans and in today's 100th issue the main topic will be to compare the two 'Rome and Juliet' Films. The first one was directed by Franco Zeffirelli in1968 and the most recent version in 1997 by Baz Luhrmann. I will be comparing the opening scene (including the prologue) up to the end of the first fight between the two families. As you watch scene 1 in each film you will see the obvious differences in the ways that both approach the prologue n different ways, they seem to be intended for different audiences and the setting, i.e. Verona and Verona beach and time set one in medieval times the other in modern day times. Luhrmann and Zeffirelli use very opposite effects and techniques in each of the Romeo and Juliet films. The contrasts between the Zeffirelli 1968 and the Luhrmann 1997 versions are vast. Even though the directors of each film use different effects and techniques, they both tell the story in their own unique way. Zeffirelli's traditional, English, authentic piece of almost theatre with basic use of lighting, camera and sound. Luhrmann's modern, loud, and emotionally gripping piece of film uses a special variety of lighting, camera and sound to emphasise the piece to the max. Luhrmann's is certainly far more powerful than Zeffirelli's in all aspects. Its use of music creates tension, joy, sadness which really adds a great deal of emotion compared to Zeffirelli's. The camera and lighting creates another world and I certainly prefer Luhrmann's to Zeffirelli's. I will begin by talking about the prologue in each and show the differences and if there are any some similarities. The prologue is an introduction to the play giving a very brief explanation of what happens during the play. In Franco Zeffirelli's production of 'Romeo and Juliet', the prologue is very brief and short. ...read more.

This effect of repeating jogs the audience's memories reminding them again and again the importance of the lines in the prologue. As the prologue stops being spoken, the same dramatic music becomes loud again. Each of the main characters are shown one by one with a pause on each with the text describing who each of the characters are and how they are either related to Romeo or Juliet or what the purpose of the character is in the film. Luhrmann's presentation of the prologue is very different to that of Zeffirelli's as he uses load music repeats the prologue and does not create a feeling of peace but make Verona beach seem like a dangerous, violent urban area. In these ways both directors present the prologue in very different ways. Now that I have compared both prologues I will talk about how the directors have shown the first brawl between the families and then the meeting between Romeo and Benvolio. As soon as the Zefirelli prologue has finished, it goes straight to scene one, which is later in the day, at the market. The Capulet's are shown walking and talking. They are wearing red and yellow colour coded costumes with codpieces. The Montague's are wearing darker colours, dark blue and black. Baz Luhrmann's characters are the opposite. The first group you see in 'Romeo + Juliet' are the Montague's, who are wearing bright Hawaiian shirts in a yellow car. When the Capulet's enter the scene, they are the ones wearing dark clothes in a blue car. The Capulet's seem to be better dressed, making them seem superior and wealthier than the Montague's. In Franco Zefirelli's film, the Capulet's (in bright colours) are talking and they are the ones who bite their thumbs at the Montague's, which provokes the fight. In Luhrmann's film, it's the Montague's in the bright clothing that bite their thumb at the Capulet's, but it is still the Capulet's who provoke the fight. ...read more.

He is the kind of person that everyone is friends with. His relationship with Benvolio is quite strong as they are cousins "good morrow, cousin". You can clearly see that Romeo is not happy with all the fights Benvolio gets involved in "o me! What fray was here?". In the Franco Zeffirelli version Romeo is again quite an innocent character. He is wearing quite tatty clothes and is holding a flower , which signifies his good nature. The way in which he enters the film gives the viewer the impression that he is feeling depressed. His demeanour is that he is a person with little on his mind. His relationship with Benvolio is not as strong as it could be. Again he is ringed by an arch which gives a similar effect on what kind of a person he is. I think that this is because he doesn't like violence and therefore tries to limit his time with Benvolio. This shaky relationship could be the explanation for why Romeo was out in the woods all morning. I think that the Franco Zeffirelli is the best at representing Romeo as a character. This is because he makes him much more innocent and seem more lonely than in the Baz Luhrmann version. When I read the text I could picture a boy in my mind and in my view Franco Zeffirelli represented that character very well. I personally enjoyed the Luhrmann version as it was quick, had music to help aid the atmosphere of the situations and provided a modern day look of the story of "Romeo and Juliet." I think the Zeffirelli version was slower did not have a lot of music but was more concise to how Shakespeare wrote the play. I think both were right in how they presented it as they were aimed at different audiences, Luhrmann aimed at teenagers and Zeffirelli at adults and Zeffirelli aimed for it to be more like how Shakespeare intended it to be shown where as Luhrmann show a fast modern day outlook on the play which I thought was very effective. ...read more.

There is much detailed observation and insightful analysis here but the 5,300 words could easily be cut to 2,000. Three and a half pages are irrelevant material on the Prologue and many points are repeated several times at unnecessary length. Paragraph and sentence construction are mostly quite loose and there are lexical issues with spelling and word choice.

With some serious editing the material could be restructured into a good essay.