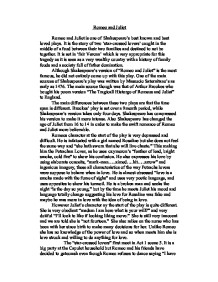 Romeo and Juliet Romeo and Juliet is one of Shakespeare's best known and best loved plays. It is the story of two 'star-crossed lovers' caught in the middle of a feud between their two families and destined to not be together. It is set in 'fair Verona' which is very appropriate for this tragedy as it is seen as a very wealthy country with a history of family feuds and a society full of father domination. Although Shakespeare's version of "Romeo and Juliet" is the most famous, he did not entirely come up with this play. One of the main sources of Shakespeare's play was written by Massucio Saternitano's as early as 1476. The main source though was that of Arthur Brookes who bought his poem version "The Tragicall Historge of Romeus and Juliet" to England. The main differences between these two plays are that the time span is different. Brookes' play is set over a 9month period, while Shakespeare's version takes only four days. Shakespeare has compressed his version to make it more intense. Also Shakespeare has changed the age of Juliet from 16 to 14 in order to make the swift romance of Romeo and Juliet more believable. Romeos character at the start of the play is very depressed and difficult. He is infatuated with a girl named Rosaline but she does not feel the same way and "she hath sworn that she will live chaste." ...read more.

she is above him at this time, like the sun. He still continues to use elaborate language "her vestal livery is but sick and green, and none but falls do wear it ; cast off" but now is not seen as the Petrachan lover as he also uses a lot more straight forward language "It is my lady, O it is my love" this showing his feelings are sincere. The fact that we see Juliet but we never saw Rosaline is so we feel she is not important to the story and also shows she was not as important to Romeo. As Romeo s speech continues he continues to use words connected with light and upwards words for example he says "two of the fairest stars in all in all the heaven, having some business do entreat her eyes to twinkle in their spheres till they return" comparing her eyes to the stars saying she would outshine them this again showing how pure and beautiful his love for her is, a total contrast to the fighting scenes we have previously witnessed. Juliet's first words "Ay me" shows how straightforward she is after Romeo has just spoke a long speech full of elaborate imagery. On hearing her speak Romeo echoes his words from the party scene when he described her as a saint and comment s that she is a "bright angel". ...read more.

Juliet first appeared as subdued, modest and very obedient towards her family's wishes; she is now rebelling and only seems to care about Romeo. Despite their contrasting natures Shakespeare reveals the depth and sincerity of their love by the way they are "in tune" with each other. They use rhyming couplets to show their love and harmony "love goes toward love as schoolboys from their books, but love from love toward school with heavy looks." Romeo carries on talking in rhyming couplets following on from Juliet, echoing the party scene. Also they are seen as equals in the play and balance each other out like the nurse and Mercutio. The play is seen as one of the greatest tragedies of all time and compresses many genres into one play which would have been loved by many then and now. Its story of how love is over before it even gets to start, through the fault of others. I think Shakespeare is trying to teach a lesson that we should always be kind to each other because you don t know how it will effect you in the end. Lots of film s have been made each with their own ideas of the way it should be shown. The most recent is that of Baz Luhrmann. It is set in modern day and portrays the play in a very unique way. Whereas Franco Zeffirelli's version is a lot more traditional, but both show the greatness of this play. ...read more.