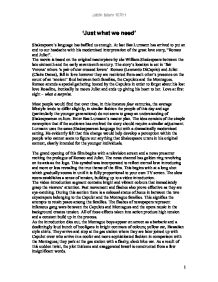 ‘Just what we need’

Shakespeare’s language has baffled us enough. At last Baz Lurmann has arrived to put an end to our headache with his modernised interpretation of the great love story, “Romeo and Juliet”.

The movie is based on the original masterpiece by the William Shakespeare between the late sixteenth and the early seventeenthcentury. The story’s location is set in ‘fair Verona’ where ‘a pair of star crossed lovers’  Romeo (Leonardo DiCaprio) and Juliet (Claire Danes), fall in love however they are restricted from each other’s presence on the count of an ‘ancient’ feud between both families, the Capulets and the Montagues. Romeo attends a special gathering hosted by the Capulets in order to forget about his lost love Rosaline, ironically he meets Juliet and ends up giving his heart to her. Love at first sight – what a surprise.

Most people would find that over time, in this instance four centuries, the average lifestyle tends to differ slightly, in similar fashion the people of this day and age (particularly the younger generations) do not seem to grasp an understanding of Shakespearean culture. Enter Baz Lurmann’s master plan. The idea consists of the simple conception that if the audience has evolved the story should require a similar adjustment. Lurmann uses the same Shakespearean language but with a dramatically modernised setting. He evidently felt that this change would help develop a perception within the people who cannot seem to figure out anything that Shakespeare utters in his original context, clearly intended for the younger individuals.

The grand opening of this film begins with a television screen and a news presenter reciting the prologue of Romeo and Juliet. The news channel has golden ring revolving on its axis as the logo. This symbol was incorporated to reflect eternal love introducing and more or less revealing the true theme of the film. This begins with at a long shot which gradually zooms in until it is fully proportional to your own TV screen. The slow zoom establishes a sense of tension, building up to a video introduction.

The video introduction segment contains bright and vibrant colours that immediately grasp the viewers’ attention. Fast movement and flashes also prove effective as they are eye-catching. During this section there is a colossal statue of Jesus in between the two skyscrapers belonging to the Capulet and the Montague families. This signifies the attempts to retain peace among the families. The flashes of newspapers represent infamous gang wars between the Capulets and Montagues and the opera music in the background creates tension. All of these effects taken into action produce high tension and a constant build up in the process.

As the introduction dies out, the Montague boys appear on screen as a barbaric and a deafeningly loud bunch of hooligans in bright contrasts of colours; yellow car, Hawaiian style shirts. They arrive and stop at the gas station where they are later joined up with Capulet crew who arrive in a cooler and more sophisticated fashion in comparison with the Montagues; they park at the gas station with a flashy, sleek blue car. As a result of this sudden twist, the plot thickens and exaggerated brawl is constructed from a few insignificant words.

Overall I believe Baz Lurmann has achieved half his goal in modernising the structure and setting of play which helps understand a little more about what many people of this time could not understand at first. But he has failed in his crucial attempt to help the viewers understand exactly what Shakespeare felt. The director has simply made this film far too new-aged for anyone to actually understand the Shakespearean culture. I wouldn’t recommend this particular film to the people who would like to gain a true understanding on Shakespearean customs.