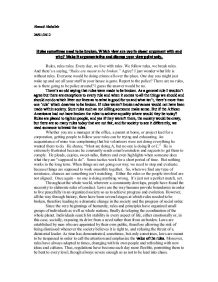 Rules sometimes need to be broken. Which view are you in closer argument with and why? Make it argumentative and discuss your view point only.

Ahmed Abdullah 26/01/2012 Rules sometimes need to be broken. Which view are you in closer argument with and why? Make it argumentative and discuss your view point only. Rules, rules rules. Every day, we live with rules. We follow rules, we break rules. And there's a saying, "Rules are meant to be broken." Agree? I just wonder what life is without rules. Everyone would be doing crimes all over the place. One day you might just wake up and see all your stuff in your house is gone. Report to the police? There are no rules, so is there going to be police around? I guess the answer would be no. There's an old saying that rules were made to be broken. As a general rule I wouldn't agree but there are exceptions to every rule and when it comes to all the things we should and should not ...read more.

An acquaintance of mine was complaining that his volunteers were not doing everything he wanted them to do. He shares, "Most are doing A, but no one is doing B or C." He is extremely frustrated because he constantly sends email reminders and requests to get them to comply. He pleads, cajoles, sweet-talks, flatters and even highlights when someone does what they are "supposed to do". Some tactics work for a short period of time. But nothing works in the long term. When things are not going our way, we need to stop and evaluate; because things are supposed to work smoothly together. So, when we find any type of resistance, chances are something isn't matching. Either the rules or the people involved are not aligned. Once again - no one is doing anything wrong. ...read more.

As time has demonstrated, sometimes, but only sometimes, laws are meant to be trespassed in order to call the attention and emphasize the value of the rules. Moreover, rules have always adapted to times, changing with its own people and refreshing with new ideas and cultures. Thus, regulations have become each day more flexible, permitting them to be bent to every level, though always severe enough so as not to be lead into chaos. However, laws seem to be too inflexible, too severe, and too authoritarian to some extent. Laws usually do not seem to consider all the details and circumstances of tangible life. Such as in emergency life situations, should the law be put above life too? Right from the first phases of human life, rules were made to be broken. Rules are made to be broken but only at some time when extreme changes need to be carried out. WORD COUNT: 713 ...read more.

A well written and thoughtful argument which uses various rhetorical techniques such as tripling, use of pronouns, rhetorical questions etc. in order to persuade and convince the audience. A few lapses in expression at times.